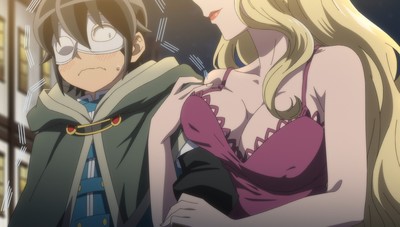 I’ll be honest: I’m still not entirely sure if Tsukimichi has any discernable sense of direction left in its story, or if it’ll just be content to screw around for the remainder of the season, but “Eat or Be Eaten” was at least an entertaining screw around session. Can I ask just one thing of the show, though? I’m begging you,Tsukimichi, to cool it with the misplaced cliffhangers, already! Last week’s episode made a big to-do with the introduction of the two new elf girls — who we learn are named Aqua and Eris — but they have absolutely nothing to do with the events of “Eat or Be Eaten” outside of two brief appearances. At this point, for all we know, these two goofy elves won’t actually have anything meaningful to do until we reach a hypothetical next season sometime in the year 2022.

Though I guess it’s pointless to be complaining so much about Tsukimichi‘s disinterest in traditional setups and payoffs, since its preferred method of storytelling has trended more toward the “Screw it, we’ll toss in whatever seems cool, and maybe we get back to it, maybe we don’t” model. That’s not my favorite approach, but at least it can lead to sporadically interesting results. Eat or Be Eaten doesn’t so much follow a plot as it does a vaguely connected series of sketches, and they work, for the most part. The opening sees Makoto and the Monster Girls enjoying a camaraderie-building dinner with the beastfolk of the demi-plane, and it is a solid enough slice of everyday isekai life for the crew. I’m still not sure why the show is going out of its way to give the beastie side characters so much screen time, since it hasn’t amounted to much beyond simple filler up to now, but at least we know their names and basic character traits now!

More compelling is the sequence where Mio and Tomoe suddenly sense that Makoto’s life force got snuffed out, only to find that, instead of being murdered, Makoto was accidentally killing and resurrecting himself as he practiced some simple concentration exercises at the archery range. It’s a pretty abstract setup, and I’m generally bored by any isekai plot points that revolve around our hero’s godlike strength, but Tsukimichi at least has the good sense to turn Makoto’s rapidly expanding well of mana power into a dilemma that the characters have to solve. Still, the show has yet to fully capitalize on any of the quirks that come from Makoto literally having enough magic power to go toe-to-toe with The Goddess, so we’ll see if anything actually comes of this development in the next few episodes.

There’s not much coming from any developments this week, as it happens, because after the mana crisis, “Eat or Be Eaten” swerves hard to the right and turns into an awkward sex comedy for no apparent reason, with the central joke being that Mio and Tomoe simply cannot stand how little action they are getting from their Master. The pair getting jealous over the busty prostitute that flusters Makoto out of his wits is funny enough, I guess, but then there’s this whole bit where Mio and Tomoe are stripping Makoto naked against his will and demanding that he mount the both of them like a prize-winning racehorse—they don’t mind going at it in the same room, at the same time; shit, they don’t even care who goes first. The ridiculousness of the escalation works as a joke, and the girls do eventually apologize for their super rapey vibes, but the tone of the sketch just feels a bit too hacky for this show. Also, there’s an anthropomorphic cat dude that happens to have Makoto’s exact face for…some reason?

I don’t know, man, this episode is just kind of all over the place. It isn’t boring, thank God, and some of its sitcom-y shenanigans actually worked better for me than previous weeks, mainly because it all centered on the main thruple’s goofy dynamic, instead of just Makoto by himself. Also, I’d be lying if I didn’t say that Makoto and Mio’s scenes this week were cute (though it’s especially weird when Makoto keeps comparing Tomoe and Mio to his two sisters). The two elf girls finally show up again right at the end, and though I think their quirky comedy-duo shtick has the potential to wear thin really quickly, I’ll just be happy if Tsukimichi can follow up on one of its teasers without getting distracted for another entire episode. Fingers crossed.