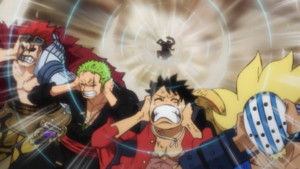 This episode is interesting, if nothing else. Once again, due to the sheer number of characters involved in Wano and Onigashima, we need these sort of pseudo-check-ins to make sure we know where everyone is. As such, this is a half and half episode where your enjoyment will very much depend on how much you like the particular characters being focused on in each portion.

I think the first half focusing on Luffy, Kid, Killer, and Zoro is probably the stronger of the two halves. I love how the more people get pulled into Luffy’s orbit, the dumber they all collectively become. Kid and Luffy bickering while Zoro tries to be responsible is genuinely hilarious. The flashback with Killer also hits just enough of an emotional cord to make it resonant. Most of the animation is “just fine” as far as a normal episode of weekly anime goes – which I think underscores how spoiled we’ve been for most of Wano. The flourish of the red hot crosses over the black background turning into a match cut for Killer’s cell was a highlight of that segment for sure.

The second half with Kinemon and co was a bit weaker for me. The “Sanji is a horndog” running joke usually falls flat for me, and that is featured more heavily here. Seeing Sanji turn into a horny tornado (hornado?), try to sneak into a pleasure hall, and actively consider CBT was just kind of par for the course Sanji comedy. In that sense, I felt like it was mostly filler, but again your mileage may vary depending on how much you like Sanji jokes. I think the better moments were certainly Nami and Shinobu recognizing Kinemon’s concern and the utter hilarity of “Robin and Jinbei are blending in” when they stand out like that.


One Piece is currently streaming on
Crunchyroll and Funimation.com. Save on Anime Streaming Subscriptions with Funimation.