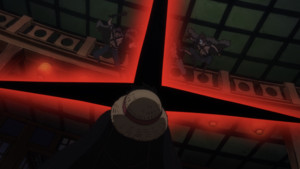 Another episode that acts as a check-in on the various actors in the Wano story. These episodes don’t do much to move the plot forward, but aren’t exactly what most folks would call “filler” either. With regards to the immediate main plot point (as much as you can call any single thread “the” main plot in a tale as expansive as One Piece) of Luffy heading up to fight Kaido, very little happens. Instead, we get a rather wide smattering of glimpses into characters that we haven’t seen in a minute.

I think the sections with the Big Mom Pirates were particularly exciting. I know it’s hard to recall a time before Wano – what with it going on over three years now in the manga alone – but here we are seeing our favorite misfit children from Whole Cake Island back in action again. It’s a bit of a bummer to see them get turned into jobbers once again with a single kick, but hey, we get to see Marco for a moment and that’s nice. I think the flashback with him is particularly illuminating, and the events at Marineford continue to loom large in the series.

There were few other little moments worth discussing. Flampe continues to exist, much to my chagrin. On the other hand, Smoothie continues to exist, much to my elation. The bit with Zoro and Killer seeing eye to eye was nice, a rare meeting of the minds among first mates. I also liked that Zoro’s response to being told that he had gotten lost again was that he would cut his own path, which I felt was a nice character moment.

Nothing much else stood out, but even at a low ebb week like this, Wano continues to be a consistently solid production.


One Piece is currently streaming on
Crunchyroll and Funimation.com. Save on Anime Streaming Subscriptions with Funimation.