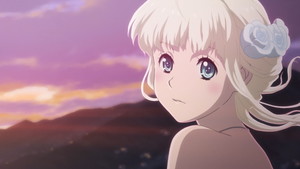 The 18th century was a great time for pirates. The Golden Age of Piracy (golden for pirates, that is)
lasted from about 1650 – 1720, and it a lot of the most (in)famous names we know today came from
those years: Blackbeard, Bartholomew Roberts, Grace O’Malley (Gráinne Mhaol), Anne Bonny, Mary
Read…As you may have noticed, those last three names are all pirate women, and that puts
Fena: Pirate Princess on the right side of history, even if the story takes place in an alternate version of
the 18th century. In fact, judging by the one historical reference made in the second episode, a mention
of “the Spanish War,” we can put this show down as taking place sometime towards the waning years
of the Golden Age, since the most likely war is the War of Spanish Succession, which took place in
1701-1714.

So that makes my not-so-inner history nerd happy. But the more important question is, of course,
whether it was worth the wait for this show to premier. As of right now, I’m going to say yes. Watching
these two episodes is like reading a particularly good YA pirate novel (or maybe a pirate romance
novel), because it’s got everything: a heroine who, despite having been forced into sex work (bad in the
18th century), is no one’s damsel in distress, a hero who’s gone from childhood friend to broody
tsundere ass, a dog, a mysterious treasure, ninjas, and an adventure on an anachronistic steam vessel to
find said heroine’s lost family legacy. What more could you ask for?

There are answers to that question brought up by these episodes, of course. One is certainly for
Yukimaru, Fena’s long-lost childhood friend, to stop whacking her on the head, but in terms of getting
the story rolling, these episodes do a good job. After the flashback to what happened ten years ago –
Fena escaping a ship under attack when Yukimaru puts her in a jolly boat and cutting the painter so that
she alone floats free – we find Fena being prepared for her “prime noctis,” i. e. the selling of her
virginity to the highest bidder at the brothel where she’s been living. Needless to say, Fena is less than
thrilled about this, but she’s also woefully ill-prepared to hatch any escape plans that might actually
work. This tells us a lot about her as a person: she’s determined even in the face of certain ugly
deflowering and unwilling to give up, even if she knows that she has no real chance of escape. She
knows that she’s really the only person she has right now to rely on; even her friend Angie, an older sex
worker who has clearly been acting the big sister, doesn’t believe that Fena can get away, nor is she
really willing to help. In fact, when we first meet Angie, she’s dressing Fena in the wedding gown she’s
supposed to wear to her own upcoming rape, a detail that feels very gross.

Luckily for Fena, two of her late father’s now-elderly retainers are on hand to affect a rescue. Otto and
Salman may not be the sharpest tools in the shed, but they do manage to get Fena out of the brothel, at
which point she and the secret band of ninjas who have also come to save her have to take things into
their own hands, because the two old guys couldn’t get out of a paper bag that was open at both ends.
All of this is basically to get Fena to the mysterious Goblin Island, a perpetually fog-shrouded land
where a colony of Japanese people live, and from there on to her journey to complete her father’s
mysterious mission. It does feel a little rushed, but mostly when you stop to think back on it. As you
watch, like any good adventure, things are coming at you just fast enough that you can keep track of
them without quite noticing that events are hustling past. The two moments that sort of brought me up
short were Fena cutting off all of her hair off-screen and the sudden appearance of Brule the dog, whom
we had last seen on Angie’s bed. Neither of them are completely out of left field – Brule presumably got out with the searchers and tracked Fena while her hair was almost certainly a representation of the
life she escaped – but in a show where rice ball grilling gets its own scene, the lack of explanation does
stand out.

Now that Fena and her ninja crew have set sail, however, we’re likely where the story wanted us to get.
While I’m a bit sad that they aren’t on a sailing vessel, there’s still enough nautical flair to make this
able to settle in to being a good old-fashioned seafaring adventure, and of course the relationship
between Fena and Yukimaru is ripe for development. Why is he so obnoxious now? What happened
after he set her jolly boat free? Did he know where she ended up and feel guilt about it? And what will
Fena do with her newfound freedom and lack of flowing locks? (They were beautifully animated, but I
can’t deny that the new look is more practical.) What is the strange stone her father left, and where is
Eden? With so many questions to answer and possibilities on the horizon, this could be the combination
of cartoony goofiness and Golden Age piracy story that hits the Treasure Island sweet spot. I’m
definitely looking forward to finding out.