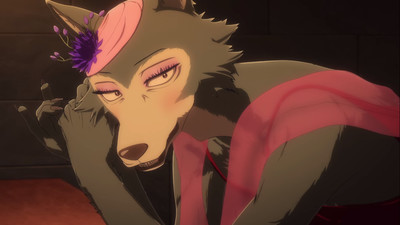 One of the best(?) parts about being a fan of BEASTARS is constant state of critical whiplash that you must exist within to even process the narrative fundamentals of Paru Itagaki‘s weird-ass world. In any given episode, you might have two or three scenes that feel utterly brilliant and perfect at nailing the very specific tone and mood that BEASTARS hits when it is at its best. You might also encounter scenes that make you jump up from your chair and scream to nobody in particular: “What the hell is going on? Is possibly the most ridiculous furry nonsense ever put to screen?” Hell, a lot of the time, you end up experiencing both of these diametrically opposed responses at the exact same time. Here’s a a free pull-quote for your marketing material, Netflix: “Watching BEASTARS will make you question whether anything you’ve ever experienced or believed even matters. It transcends good and evil, and it spits on whatever childish notions of a sane and rational universe that you may have once held dear. Also, the animation is pretty cool looking, and I really want the rabbit and the wolf to kiss.”

We have at last arrived at BEASTARS‘ second season finale, and the moment you finish both “Scatter Your Scales” and “A Taste of Rebellion”, it is pretty clear that, for all of its clever moments and satisfying character beats, this season is nowhere near as good as the first one was. That said, BEASTARS remains so defiantly committed to its supremely weird sensibilities that it doesn’t matter too much that the second season stumbled, because you still can’t find much anything else like it around. Like, yeah, most every element of BEASTARS is cribbed from any number of disparate anime influences, but when you put it all together, the end result is simply too fucking bizarre to ignore. Imagine what would happen to a normal, reasonable person if they were forced to sit down and reckon with a plot summary of these episodes:

Legoshi has a psychedelic trip after eating a moth larvae, which results in a spiritual conference with an otherworldly Moth Spirit, who gives the wolf some advice on how to psychologically cope with his compulsion to fetishize his and his peers’ dietary habits. Then, he dresses like a stereotypical southern bell to sneak into the Black Market and recruit Louis the Teenage Mafia Don, since Louis needs the deer’s emotional support in the upcoming death battle against Riz. Later, after Louis’ attempts to leave the Shishigumi end with him getting covered in Ibuki’s innards, the former president of the Cherryton Drama club finds Louis and Riz sharing a casual, mid-murder bro-session. In order to turn the tides, and to fully realize his latent love for all carnivores (but specifically Legoshi), Louis allows Legoshi to eat his foot. This transforms our hero into a mega-jacked Super Legoshi, who eventually manages to overpower Riz, though not by violence; it is the pure, non-murderous bond that Legoshi and Louis share that break Riz out of his rage, which convinces him to turn himself in to the authorities. Oh, and Haru shows up during the end-credits montage, too, because she’s still technically a main character in this show, maybe!

It’s utter madness, I tell you! Now, I usually go into these long plot-recaps when an anime is so bad that I can offer nothing better letting the evidence speak for itself, but I want make it clear that I really liked these last two episodes of BEASTARS Season 2. Sure, the show’s ambitions really got away from it this year, to the point where “A Taste of Rebellion” has to scramble just to cram some voice-over and a rushed montage in its final minutes, because otherwise the season literally wouldn’t have had an ending. And, yeah, it sucks how little to do there was for any character not named “Legoshi” or “Louis”. Haru’s appearances often felt like little more than cameos a lot of the time, and can someone remind me again why Pina was introduced? Even Riz proved to be a fairly underwhelming villain; the end of his story ended up making Tem’s murder feel less important than it was at the beginning of the series, somehow.

Yet, here I am, feeling pretty positive about the experience overall. BEASTARS is a mess, but it’s an absurdly compelling mess, and even when it doesn’t work as a cohesive whole, its individual pieces are often strong enough to carry it across the finish line. I wasn’t even a fan of the Lou-Goshi ship before reviewing these episodes, but now that everything is said and done? I get it. I really do. I’m still Team Haru, ride or die, but I’m not about to sit here and argue that Louis and Legoshi are lacking in chemistry. Did you see how dolled up that Legoshi got for Louis in that screenshot, up there? You don’t do that for another man unless both parties involved share at least a teensy bit of ravenous sexual tension.

Studio Orange will have at least one more shot at telling the story of Paru Itagaki‘s Weird and Horny Teenage Animals, and while I can’t wait to see it, I also hope it is the last season of BEASTARS that we get. Without getting too spoilery, all of the pacing and narrative problems that started to bubble up in this season are merely harbingers of the weird bullshit to come in future arcs, and I say that as an unabashed fan of the manga’s increasingly nonsensical final chapters. I think the best thing that could happen for the BEASTARS anime would be if it got the chance to trim a lot of the fat from Itagaki’s manga and focus on the things that made the story special in the first place.

Now that Legoshi is dropping out of school for good, there are a lot more sides of the BEASTARS world to explore, and our heroes will have to confront what life in a word filled with predators and prey is like once you cross over into adulthood. Will there be love? Will there be hardship? Will there be even more buff-boy animal battles and elaborate murder plots? I’m going to put my money down on “Probably!”, but I’m always happy to be surprised, and we’ll just have to wait and see for sure what the future brings for Legoshi, Louis, Haru, Juno, and the rest. Whatever it ends up being, good or bad, I have no doubt that BEASTARS will at least make sure we are entertained.

• This has been a very fun and challenging season to write about, because I’ve had so much fun with it, even as I recognize that it simply doesn’t work as well as what came before it. If I had to give the whole season a grade, it would probably be a solid 4/5. Not bad by any stretch of the term, but missing the focus and the romantic spark that made the first season so spectacular.

• My Perfectly Reasonable Demands for A Third and Possibly Final Season of BEASTARS: #1. More Haru. #2. More Jack. #3. More of Legoshi spending time with Haru and/or Jack.

• You know what? While we’re at it: #4. More Shishigumi! Yes, they’re all a bunch of craven, murderous criminals, but they’re also Good Boys™, okay?