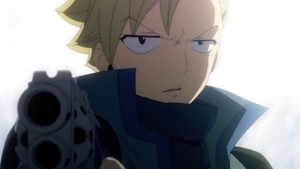 The first two episodes of Edens Zero were all about establishing our main duo and the potential scope for this new story. Episode three follows up on that, giving our characters a grand lofty goal to strive for while also effortlessly transitioning us into the show’s first arc. Episode three is admittedly the slower of the two, acting as a bit of a breather from all the action present in the former two episodes while also giving us more information about this world. Despite the bright colors, Edens Zero is definitely a more cynical world compared to Hiro Mashima‘s other works. Guilds are no longer a place where you can come together like a family. No longer are ambitious dreams treated with support and wonder; instead, they are callously disregarded at jump. People are really just out for themselves and want nothing more than to tear others down. Despite a cameo here and there, it’s clear that Mashima is going out of his way to tell the audience that this is not the same journey fans might be used to.

I like how that expectation is sort of a theme setup for this arc with the introduction of new characters Pino and Weiss. The former feels very much like they are primed to be the new definitive mascot for this series while she’s literally introduced to us in a broken state with her former life deleted. Whereas Weiss is young, rebellious, and is much more of the standard loner type. This throws off Rebecca at every waking moment considering the fact that this is apparently the same person who, 50 years from now, will end up being the person that would instill her with all of her upstanding values. Also yea…time travel!

Episode 4 makes it very clear we’re dealing with time travel in this science fiction adventure series and admittedly it comes straight out of nowhere. There’s no real immediate trigger or foreshadowing to this happening – it’s literally an instance where everything appears normal, but as you pay attention to your surroundings, you realize things aren’t quite the same as what we saw before. I’m not always the biggest fan of time travel stories due to inherent narrative cheats that need to occur for them to “work”. However, thematically, I don’t hate how it’s used here.

This gets us in a similar mindset to Rebecca and Shiki who both very much fell into the circumstances without any warning or build up. I do like the way that the whole situation is played up as a mystery. Parts of episode three and four pull back the curtain a little bit, showing the scenes and characters in ways that are explicitly meant to feel as though they will be important later on. The show even personifies a narrator who is supposedly aware of the past, present and future (anyone think of The Watcher from Marvel’s What if… series?). It’s nice to know that Mashima seems to be planning out his story with a bit more forethought, planting seeds for things to come without ruining the pacing of what is occurring in the immediate action. It’s tantalizing to imagine what other dark future might be in store for our heroes after we’ve just gotten to like them but it is not time for that to happen quite yet. We must deal with one mystery at a time and I’m curious to see how such a crazy event plays out!