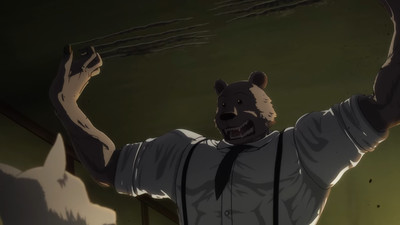 When Twin Peaks originally revealed the identity of Laura Palmer’s killer in November of 1990, it was widely considered to be a mistake on the show’s part, both by its critics and its creators. Even though “Who Killed Laura Palmer?” was the tagline of the series, and that original brought FBI Agent and coffee connoisseur Dale Cooper to the town of Twin Peaks in the first place, the show itself was always more of a surreal soap opera, with Laura Palmer’s death serving merely as the inciting incident for its many strange and dark melodramas to spring forth. A lot has changed over the years, of course, especially considering the ways in which Fire Walk with Me and Twin Peaks: The Return were able to transform the franchise‘s mythology, but still, you can hardly blame the many audience members who started to fall by the wayside when Laura’s killer was (kind of) found out. I imagine many of them must have reacted to that episode with a casual shrug and a furrowed brow, maybe accompanied by a slightly puzzled “I guess that’s it, huh?” They had just learned the lesson that fans of LOST and The X-Files would have to reckon with decades later: The answer to the mystery almost never as satisfying as watching the mystery itself unfold.

Anyways, that’s enough about long-gone science-fiction dramas from the late 90s and early 2000s—our ol’ gumshoe Legoshi has his own mystery to solve! Given how much weight Tem’s death has put upon the students of Cherryton, and how the symbolic meaning of the murder is also a millstone that Legoshi’s happy to wear around his neck, there’s bound to be all sorts of twists and turns to go before we uncover the culprit. After all, it isn’t like the killer is going to be some random background character that we’ve barely ever seen before, or the kind of person who will immediately confess to killing Tem within a minute or two of being introduced. Now, I’ll just take a nice big gulp of this damn fine coffee I just brewed for myself, and then I can dive right into the next couple of BEASTARS episodes and see what’s in store for…

Oh. Well…son of a bitch…I’ve been reviewing BEASTARS for over a year, and Grizz just…blurted it out.

In all seriousness, I’ve been a fan of the manga for a long time, so I knew who Tem’s murderer was well before “Unforgettable Sweetness” decided to pull an Ephraim Winslow and spill all the goddamn beans, but that only meant I was even more curious to see how Studio Orange would handle the reveal, and what fans’ reactions to it would be. I love BEASTARS, to the point where I am probably more forgiving than I should be when it comes to some of the show’s more “interesting” storytelling decisions, but even I have to admit that, by nearly every standard metric of what constitutes a good mystery story, the way the show handles introducing Riz the Giant Murder Bear is…bad? It’s kind of bad, right?

Now, I’m not arguing that the killer had to be a pre-established character such as Bill or Aoba or whomever. The whole point of the murder was never really about which of the Cherryton students killed poor little Tem; it wasn’t even really about avenging Tem, since we the audience have barely gotten to know anything about the guy. The point was that, for the prey animals at Cherryton, the killer could have been any of the predators that they go to school with every day, and that they got away scot-free with the crime, which leaves them all the opportunity in the world to kill again. For the predators, it’s the fact that every worst stereotype and fear that the prey animals hold against them seemed to have been confirmed, the horrible truth that their friends and colleagues may never truly see them as anything other than bloodthirsty monsters just one bad day away from snapping completely and eating the herbivores whole.

In short, Tem’s killer didn’t have to be a shocking surprise to the audience, because the impact of the reveal is still powerful enough to shake Legoshi and the others to their core. Just like what happened between Laura Palmer and the fragile and fractured citizens, what makes Tem’s death interesting is the ripple effect it has had on the likes of Legoshi, Louis, Haru, Bill, and even Tao, the unfortunate leopard who accidentally ripped of the arm of the even more unfortunate anteater, Kibi. The fear, self-loathing, mistrust, and all of the juicy sexcapades that those dark emotions have fueled have been the real draw of BEASTARS‘ story.

I think it says something that two of the most compelling dramatic moments of these two episodes were the ones that explored the complex predator/prey relationships that have blossomed between two different pairs of friends: Bill and Els, with their quasi-romantic argument about each other’s reactions to the shutdown of the Cherryton clubs, and the sweet friend date that Peach and Sheila go on together. Then there’s the delightfully fraught encounter that Juno has with Haru at the school gardens in “Laughing at the Shadows We Cast”, which contains one of my favorite Haru moments of all time, when she tells Juno to stop getting so hung up on Legoshi, that she’s fine if they don’t even talk about the guy for a bit. Sometimes a girl like Juno just needs to work out her complicated feelings about forced segregation while she also tries to suss out what makes this rabbit girl so damned hot in the eyes of the dork she’s crushing on. Everyone at Cherryton has been affected by how Tem’s death reframed and reinforced the predator and prey animals’ place in the world, so the murder mystery mattered but, like, it didn’t matter, you know? It’s another way that BEASTARS is very Lynchian.

That said, it’s hard to ignore how fundamentally anticlimactic it is for Legoshi to have kind of put in some solid detective work, only for his saliva-swapping clue hunt to lead him to the truth of Tem’s killer being…some guy. I didn’t have time to go back and check every episode of the first season, or anything, but I am fairly certain that Riz the bear has literally had not one speaking line until “Unforgettable Sweetness”, and a few scant background appearances isn’t enough to make a credible suspect in a murder mystery. The fact that Legoshi just so casually outs Riz as the killer after Kibi gets dismembered is silly enough, but then it is immediately surpassed when Riz admits to his crimes without a second thought, and then we learn that Pina was within earshot the entire time, so now he’s involved in this caper, despite insisting that this society-shattering act of bloodshed has nothing whatsoever to do with him.

I won’t spoil the Laura Palmer reveal from Twin Peaks, in case anyone out there is somehow that sensitive to spoilers for a thirty-year-old American television drama, but imagine if, instead of [REDACTED], we learned in Episode 14 of Twin Peaks that Laura was actually killed by Drew, that one gas station attendant who occasionally appeared as an extra whenever Dale Cooper needed to refill his tank, and that Drew had this whole tragic backstory that motivated the awful murder. Except, nobody knew about any of this until after the fact, naturally.

Then again, maybe Paru Itagaki understood that the Twin Peaks fervor died out because the disappointing answer to the mystery was somewhat predictable (or at least, as predictable as a mystery that hinges on the motivations of evil spirits named BOB and giants from other dimensions could possibly be). So, instead, BEASTARS fully commits to the bit and makes Riz reveal so underwhelming that you just have to accept it and move on, so we can learn all about the muscle suppressing medications that all the big bear boys have to take, and how kicking those meds and ditching his honey fix caused Riz to lose his mind and murder Tem in a fit of hallucinatory blood rage. That way, the show can ditch the noir detective angle and go back to focusing entirely hormone-addled teenage soap opera (with a dash of mobster crime story and vigilante superhero comic tossed in for good measure).

Was BEASTARS‘ dalliance with the genre of detective fiction particularly successful? I’m not sure, at least not if I’m looking at it from the angle of someone craving a decent crime caper. As a bizarre and sometimes too-intense parable of angsty, lovestruck teenagers trying to find their place in the world, though, BEASTARS is as good as it has ever been. And now, Legoshi has met a foe who is somehow even stronger and more emotionally fucked-up over their carnivorous instincts than he is. That is bound to be to be the recipe for a good time—for us, at least, if not for Legoshi.

• Another great moment belongs to Bill, who, after wallowing in self-pity over how many prey animals are looking at him and other predators with suspicion and fear, shouts to himself, “You’re the friendly feline of the drama club! You can’t be depressed!”

• For as iffy as I still am as the utter non-mystery behind Tem’s murder mystery, I do love the scene where we see how Tem eventually fell back on his words of friendship and called Riz and all the other predators “monsters”, only for Riz to hear incredibly kind, borderline romantic words of true friendship…right before tearing Tem apart with his claws and teeth.

• Also, I ribbed LOST a little up there, but I don’t want anyone to mistake that for me being a part of the group of fans who shit all over that show’s ending and complain about all of the unanswered mysteries, or whatever. LOST rules, especially its finale.