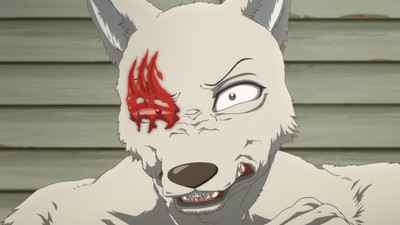 Depending on who you ask, BEASTARS‘ refusal to commit to any one specific genre or mood is either its greatest strength or its Achilles’ heel. The truth, in my humble opinion, is probably one of those “It’s a little of Column A, a little of Column B” situations. Personally, I love how Paru Itagaki is able to cram so many different styles and interests into what could have easily been a furrified high-school love story—sometimes it’s a mob drama; sometimes it’s an action-adventure story about a weird, horny teen vigilante and his grumpy panda bear mentor; sometimes it’s a dark riff on noir murder-mysteries and criminal revenge sagas. Hell, most of the time, BEASTARS is all of these things, and that doesn’t even include all of the random slice-of-life interludes we get every episode or two.

That said, I’ve always been a fan of the kinds of overambitious, messy passion projects that allow authors to toss every single thing they love into one pot, damn the consequences. (This reminds me that I need to work more references to Southland Tales and The Fountain into these reviews, somehow). I’m also a self-aware enough critic that I can also recognize that, for as entertaining and thrilling as BEASTARS can be, this second season represents where the story starts to lose a lot of its focus, and without spoiling anything to come in the next (and ostensibly final) batch of episodes from Studio Orange, this isn’t a trend that is going away anytime soon. I think what made BEASTAR such a smash hit with its debut season is that, for all of its ultra-horny furry weirdness, the initial romance between Legoshi and Haru is a very compelling teenage drama. It’s like one of those really popular John Green novels that all of my students seem to love, except, you know…with a bunch of naked animal people.

This year, though, BEASTARS can feel like a completely different show from week to week, to a much starker degree than its first season, and I can easily imagine why fans might find it a disappointing direction for the series to head. Take these two episodes, for instance. “A Busted Electric Fan” and “The Shadows We Cast” both contain great elements of every “version” of BEASTARS, and yet I am wondering whether it is coming together into a cohesive whole in the way it seems that the show once did. A lot of this has to do, I think, with Riz, who is officially the main antagonist of the season. On paper, he’s a great character, and a perfect foil for Legoshi, since he is a carnivore who succumbed to his worst instincts and let the delusions of his hunger consume him entirely. The problem, for me, is that while he works well as a representation for a powerful idea in the story, he’s not particularly interesting as a character. We don’t know enough about him beyond the broad archetypes he represents for the society of this world to really sympathize with his plight, which ends up ma

My wife has been casually watching the show with me every week, and one of her number questions about this whole conflict is why Legoshi doesn’t immediately turn Riz into the authorities, now that the bear has fully confessed to murdering Tem. The most accurate answer is probably that, if Legoshi did that, BEASTARS wouldn’t be able to indulge in the many Shirtless Manimal Fights™ that it loves so much. I think it also makes sense for Legoshi, at this stage in his development, because he recognizes that Riz is the beast that he could have been, if his carnivorous energy weren’t currently being channeled into his fetishistic desire to protect Haru, and by extension, all herbivores from harm.

Jesus Christ, this show is so goddamn weird when you actually get down to describing it.

Anyways, like I said, this is cool stuff when you’re analyzing it in reviews after the fact, but the experience of watching it in real time can be awfully disjointed. One minute, Legoshi is beating up back alley predators in a stylized street fight that feels ripped straight out of one of Guy Ritchie’s (underrated) Sherlock Holmes movies, and the next minute, Tao and Kibi are getting an exceptionally dramatic reunion for characters who we barely even knew the names of before the whole arm-ripping incident last week. Then, we spend a bunch of time with Pina and his spooky run-in with Riz, which works fine in advancing the “Legoshi Needs to Beat the Shit Out of This Bear, Already” plot, though it isn’t like we have any reason to give a shit about Pina specifically. And Louis is still running around and doing his Louis thing, which is one of those storylines that actually benefits tremendously from my knowing what is going to happen in advance, since it would feel very directionless otherwise.

Well, that’s not entirely true. I complain about BEASTARS inability to find a meaningful direction in which to aim all of its pent up energy, but man, when it does hit, it hits the bullseye. Louis and Legoshi’s reunion is one of the scenes that the whole season has been building up towards, and it’s pretty damned great once the two are back together. Legoshi can’t stop uncontrollably wagging his tail, even when the Shishigumi have him at gunpoint, and Louis immediately falls into his usual routine of dramatically going on about how much he totally doesn’t need Legoshi as a grounding and inspirational influence or anything, baka. Criminy, this was the episode where Haru finally confessed her love for Legoshi (which was adorable as hell, for the record), but Legoshi and Louis’ fraught declaration of their places in the world may be the emotional peak of the season, so far.

Look, I’m not saying that I’m suddenly Team Lou-Goshi or anything, but I can say that the BEASTARS anime has helped me understand the shippers more than I ever did when I was reading the manga. I guess it’s a testament to how, even when the story is as overstuffed and all-over the place as it is, BEASTARS is never lacking in entertainment value. Plus, did you guys see that bathroom brawl between Legoshi and Riz? That shit was pretty tight. If the story isn’t going to give me the sappy LegoshiXHaru goodness that I crave just yet, I guess more Shirtless Manimal Fights™ are a decent consolation prize.

Pokemon Origins - This Week in Games