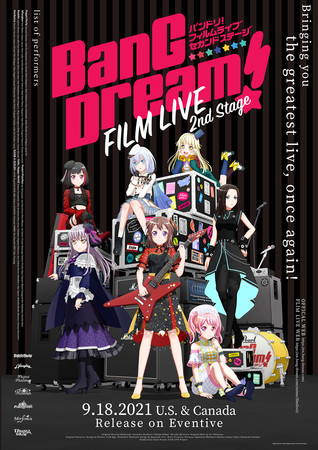 The film opened in Japan on August 20. The encore segment of the film’s concert footage features different bands performing a different new song every week, for the first three weeks of the film’s release. Poppin’ Party, Pastel*Palettes, and Morfonica performed the “Kizunairo no Ensemble” song in the first week; Roselia and Afterglow are performing the “Kyōsen no Red x Violet” song in the second week; and RAISE A SUILEN and Hello, Happy World! will perform the “Ras-Ha-Pii-Pō” song in the third week.

The BanG Dream! FILM LIVE anime film based on the BanG Dream! franchise opened in Japan in September 2019. Sanzigen returned to animate the film, and Bushiroad distributed the film. Sentai Filmworks has licensed the film.

The main BanG Dream! television anime’s first 13-episode season premiered in January 2017, and Anime Network Online and Crunchyroll streamed the first season as it aired in Japan. The anime’s second season premiered in January 2019. Sentai Filmworks licensed the anime, and HIDIVE and Crunchyroll both streamed the series as it aired.

The BanG Dream! 3rd Season television anime debuted in January 2020. Sentai Filmworks licensed the season, and HIDIVE and VRV streamed the series as it aired.