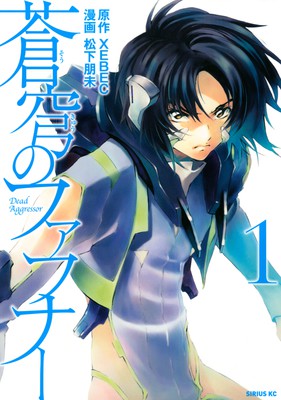 The manga launched in Kodansha‘s Shonen Sirius magazine in September 2014, but transferred to Kodansha and pixiv‘s Palcy manga app in 2018. Kodansha published the manga’s eighth compiled book volume on February 9. The manga went on hiatus for a year from October 2019 to October 2020.

The manga touts itself as a “complete version,” which adapts not only the Fafner television anime but also the franchise‘s novel, drama CDs, and stage play. Fafner anime and novel writer Tow Ubukata supervised the manga, and XEBEC is credited with the original work.

Mikami Akitsu also drew a Fafner: Dead Aggressor manga, and MediaWorks published the series in two compiled volumes in 2005 and 2006. Digital Manga Publishing released the series in English in 2010, and it describes the story:

A small island of Tatsumiya, is located off the coast of Japan, quietly tucked away and it all seems calm and peaceful, until a sudden attack is made by the enemy – Festum. Enter Kazuki; who knows that he must pilot a Fafner in order to defeat Festum. Kazuki is successful, but shortly after the attack it is revealed that the island is artificial. It then begins to move around the ocean in an attempt to evade not only Festum, but the rest of humanity. As a result of the continuous attacks, many of the youth on the island must be trained as Fafner pilots, but Kazuki is the most skilled and qualified. Can the youth of Tatsumiya continue to withstand these brutal attacks by the Festum or will they be destroyed altogether?

Funimation released the original 2004 anime Fafner and the 2010 film Sōkyū no Fafner: Dead Aggressor: Heaven and Earth. Crunchyroll streamed both halves of the Fafner EXODUS sequel series in various countries as they aired in 2015. A new anime project titled Sōkyū no Fafner THE BEYOND is ongoing with 12 episodes that are first screening in theaters in Japan. The first three episodes debuted in theaters in May 2019, and the last three episodes will debut in theaters on November 5.