Delayed due to “various circumstances” 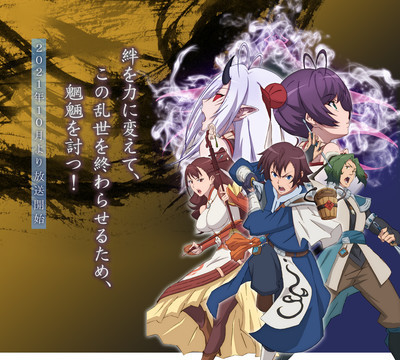 The production committee for Gensou Sangokushi -Tengen Reishinki-, the television anime of UserJoy Technology’s Taiwanese role-playing game franchise Fantasia Sango (Huanxiang Sanguozhi or Gensou Sangokushi), announced on Friday that the anime has been delayed to an as-yet unannounced premiere date due to “various circumstances.” The anime was previously slated to premiere in October.

The game combines the Romance of the Three Kingdoms (Sangokushi), one of China’s Four Great Classical Novels (along with Journey to the West, Dream of the Red Chamber, and Water Margin/Suikoden), with supernatural fantasy elements.

The story is set in ancient China during the Three Kingdoms era, when various powerful warlords began manuevering to conquer the known realms. After it was wiped out in unforeseen circumstances, the 6th Unit has been reassembled with members from diverse, troubled pasts: the leader and seal practitioner Ōki, the spirit purifier Shunkyō, Teiken, and the demon slayer Shōrei.

Shunsuke Machitani (planetarian) is directing the anime at Geek Toys with assistant director Shinpei Nagai. Masashi Suzuki (The Ambition of Oda Nobuna, I couldn’t become a hero, so I reluctantly decided to get a job., Kanokon: The Girl Who Cried Fox, Plunderer) is in charge of the series scripts, and CSPG and Tetsutarō Yui are designing the characters.