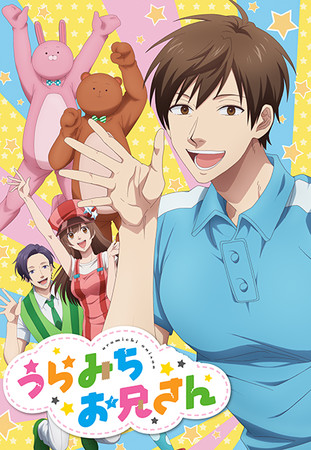 Funimation revealed the cast for the English dub of the television anime of Gaku Kuze‘s Life Lessons with Uramichi-Oniisan (Uramichi Oniisan) manga on Saturday. The company will begin streaming the first episode of the anime in English on Monday.

The anime premiered in Japan on July 5 after a delay the from its previously scheduled 2020 premiere. The anime’s website cited “production issues” as the reason for the show’s delay. Funimation is streaming the anime as it airs in Japan.

The manga series centers on a 31-year-old man named Uramichi Omota who has two sides to his personality. He appears as the young man in charge of physical exercises on the educational program “Maman to Together.” Although he has a fresh and upbeat demeanor on the show, he is actually a bit emotionally unstable. The manga reveals the less-than-sunny parts of life for young adults.

Nobuyoshi Nagayama (Smile Down the Runway, Are You Lost?, Happy Sugar Life) is directing the anime at Studio Blanc (My Girlfriend is Shobitch). Touko Machida (Lucky Star, Smile Down the Runway, Wake Up, Girls!) is overseeing the series scripts, Mizuki Takahashi (The Ones Within) and Yusuke Shibata are designing the characters, Kisuke Koizumi (Dororo, Juni Taisen: Zodiac War) is the sound director, and Kei Haneoka (Kono Oto Tomare!: Sounds of Life, Negima!) is composing the music. Kuze is credited with supervising the anime.

Kodansha Comics is releasing the manga in English in print.