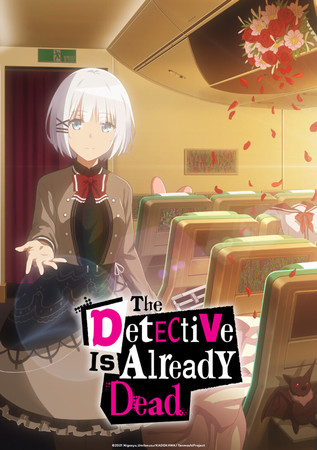 Funimation announced on Saturday that it will stream an English dub for the television anime of Nigojū and Umibōzu‘s The Detective Is Already Dead (Tantei wa Mō, Shindeiru.) light novel series from October 3. The English dub cast includes:

Funimation began streaming the anime on July 4, and it describes the story:

The series follows Kimizuka Kimihiko, a young man who is always getting into trouble, as he finds himself the assistant of Siesta, a globe-trotting detective, and the two of them solve a series of mysteries.

But after years of adventuring and saving lives, Siesta mysteriously dies, though her legacy will shape the lives of Kimihiko and others as they move forward.

Manabu Kurihara (Uzaki-chan Wants to Hang Out! character designer/chief animation director) directed the anime at ENGI. Kazuya Miura and Shin’ichi Fukumoto served as the animation superivsor and the assistant director, respectively. Deko Akao (Arakawa Under the Bridge, Suppose a Kid From the Last Dungeon Boonies Moved to a Starter Town) was in charge of the series scripts. Yōsuke Itō (Hensuki, Holmes of Kyoto, King’s Game The Animation) designed the characters. Yuuyu, Naoki Tani, and Tatsuya Yano composed the music, and INCS Toenter produced the music.

The anime premiered with a one-hour special on the AT-X channel on July 4 at 9:30 p.m., and then ran on Tokyo MX, Sun TV, KBS Kyoto, BS NTV, and TV Aichi, as well as on the dAnime Store and other streaming services in Japan.