Square Enix streamed a short version of the opening animation video on Friday for its Gate of Nightmares smartphone RPG, which will feature character designs and world-building by Fairy Tail and Edens Zero manga creator Hiro Mashima.

The cast includes (Note: Character name romanizations are not official): 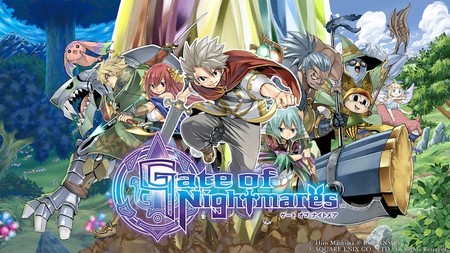 The game is slated for iOS and Android, but Square Enix has not yet revealed a release date. The game was accepting applications for beta testing until June 25 and is currently open for pre-registration. The game will be free to play but will include optional in-game purchases.

The game is a traditional sword-and-sorcery fantasy set in the real world and Lemurias, a parallel world where people’s dreams blend together and become real. On Lemurias, monstrous creatures known as Nightmares are born from people’s fear and torment. The story begins with the meeting of the girl Emma and the boy Azel. Emma is a Nightwalker, trained to fight by using Nightmares. Azel is a boy who seems to attract Nightmares to himself.

Jin Fujisawa, the scenario writer for many games in Square Enix‘s long-running Dragon Quest RPG series, is writing the scenario for the game. Yasuharu Takanashi, who composed the music for the television anime of Mashima’s Fairy Tail manga, is composing the game’s music.