The official website for Given: Uragawa no Sonzai (Given: The One on the Flip-Side), the new original anime disc based on Natsuki Kizu‘s Given manga, began streaming a new promotional video for the anime on Friday. The video previews for the first time the anime’s new theme song, which shares the same “Uragawa no Sonzai” title as the anime. The titular in-story band Given performing the song. 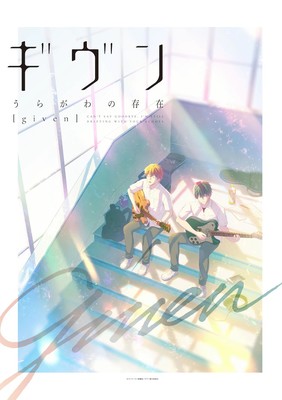 The new anime will focus on Mafuyu and Ritsuka during the events of the Given film. It will ship with the limited edition of the manga’s seventh volume on December 1.

The Given television anime premiered on Fuji TV‘s Noitamina programming block in July 2019. The anime is the “first anime based on a boys-love manga” to air on Noitamina. Crunchyroll streamed the series as it aired, and it describes the story:

Somehow, the guitar that he used to love to play and the basketball games that he found so fun just lost their appeal…

That was until Ritsuka Uenoyama randomly met Mafuyu Sato. Ritsuka had started losing his passion for music in his everyday life, but then he hears Mafuyu sing for the first time. The song resonates with his heart and the distance between them starts to change.

The Given anime film opened in Japan in August 2020. Crunchyroll began streaming the film on February 2. Fuji TV‘s new Blue Lynx boys-love anime label produced the Given film. The television anime focuses on high school students Ritsuka and Mafuyu, but the film focuses on the adults Haruki, Akihiko, and Ugetsu.

The manga is also inspiring a separate live-action series that debuted on Fuji TV‘s FOD (Fuji TV on Demand) streaming service on July 17. Crunchyroll is streaming the series as it debuts in Japan.