Ministry of Health, Labour and Welfare warns that overwork may increase as businesses attempt to recover from COVID economic downturn 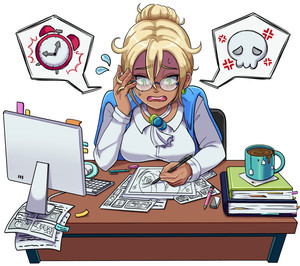 An investigation by the Ministry of Health, Labour and Welfare conducted in the last fiscal year among 24,042 businesses in Japan found cases of illegal overtime work at 37% of businesses.

Of the locations where overwork was confirmed, 33.5%, or 2,982 locations, were found to have cases of working more than 80 hours of overtime per month. 4.7%, or 419 locations, had people working more than 150 hours per month. The cases were the result of either the absence of a labor-management agreement, which is required for overtime work, or because the businesses were forcing workers to work overtime beyond the upper limit of the labor-management agreement.

In one extreme example, the ministry confirmed that a small business in the retail industry had been allowing employees to work 235 hours of overtime per month without a labor-management agreement. The Labor Standards Inspection Office promptly issued corrective guidance to improve the situation.

The government has been attempting to curb long working hours in Japan through legal reform. Last April, small and medium-sized businesses became required to regulate the upper limit of overtime work to 100 hours per month. Regular working hours are restricted to 720 hours per year.

The Ministry of Health, Labour and Welfare stressed that overwork may increase further as businesses attempt to recover from the COVID-related economic downturn.

“In the last fiscal year, there was a tendency to shorten working hours due to the influence of the new coronavirus. The amount of illegal overwork might have decreased, but health impediments caused by long work hours are still occurring frequently. There is a concern that as the economy heads towards recovery, there will be workplaces that enforce long working hours due to lack of personnel. We endeavor to provide thorough guidance into the future.”