Home » Growing Pains: How To Your Eternity Expresses the Experience of Being Human
Anime

Growing Pains: How To Your Eternity Expresses the Experience of Being Human

Fushi and Gugu may not be related by blood, but by every other facet of the word, they’re brothers. They live, work, and struggle together, and of course, hurt one another, too.

In episode 8 of the epic fantasy tale, To Your Eternity, Gugu decides to experiment on Fushi, testing his ability to generate inanimate objects from his body. Fushi’s face curls into an impossibly perfect n-shaped frown when Gugu burns his hand with a torch. But the “older brother” doesn’t apologize for the deed—instead, he reprimands him: If Fushi is upset, he should speak up. 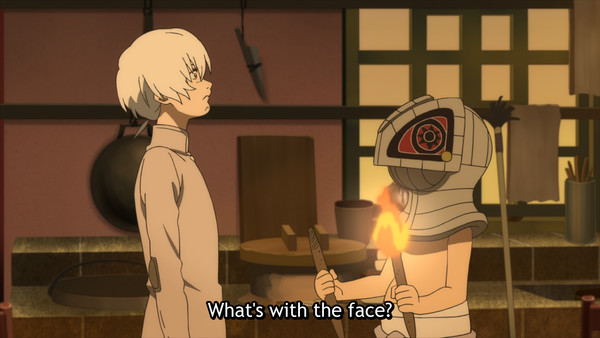 Fushi accepts the admonishment and remarks, “I learned.”

In the tradition of anime like Kino’s Journey and Wandering Witch – The Journey of Elaina, To Your Eternity follows a traveler who learns about humanity while moving from place to place and living among different groups and cultures. What’s uncommon about this series, however, is the traveler’s form. Fushi is more akin to an extraterrestrial or interdimensional being, like E.T. or Starman, rather than a human like Kino, having originally been in the form of an orb tossed to the planet by a spirit being known as The Observer.

When this alien life form is stimulated, it can create the non-organic matter that provided the provocation (this was what Gugu was attempting to do—to use Fushi to create fire). Further, when a human or animal it forges an attachment to dies, it gains that creation’s form, with the first, an adolescent named “Fushi,” being a favored manifestation.

So it’s not just physical pain like the fire that helps Fushi develop, but emotional, too. In fact, it’s when intimate bonds— first formed through more primal contact, like that of the orb to the wolf, Joaan, and then by more human connections like the infant-mother one he develops toward the young girl, March—are torn apart, that Fushi’s greatest growth occurs.

By the time his brother Gugu passes, Fushi has developed into a being whose mentality has matured to perhaps that of an elementary schooler. Gugu’s death profoundly impacts him. Fushi is terribly hurt—and so is the audience. In fact, by this point I wondered, “Is it worth continuing this series? Everyone I care about is dying, and I’m not sure I can take this any longer!”

Fushi thinks similarly. Lost in more than one sense of the word, he wanders away from the home he shared with Gugu, but is found by his “grandmother,” Pioran. Their reunion is short-lived, however, as the two are conned into boarding a ship headed to the prison island of Jananda, and Pioran is separated from Fushi and incarcerated.

In desperation, he turns to The Observer, whom he’s come to vilify, asking if the “black thing” will take him to Pioran. But The Observer responds that it will only assist Fushi if doing so helps him “to grow.” When Fushi says that he doesn’t care about growing, The Observer infers that he should do the work himself, pointing toward what the immortal already knows, that he can free Pioran should he win the death match tournament being held on the island. 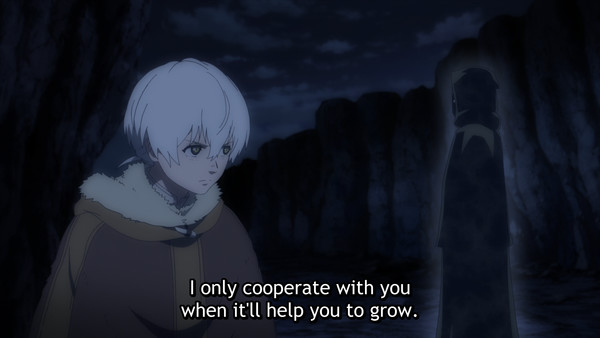 But Fushi doesn’t want to continue participating in that vile tradition to determine the island’s leader. “It hurts,” he states, referring to the physical pain he would have to endure, and following up with, “I don’t want to put them through pain,” explaining the emotional toll as well.

Fushi’s reply is a simple one, expected of a child. He doesn’t want to feel pain; neither does he want to inflict it. But it isn’t not too far removed from an adult response either—at least not far from my own. I spent much my adolescence and young adult life avoiding pain, running from it as best I could even though I agreed with The Observer’s assertion: “Pain has the important function of promoting growth.” As I’ve matured, I’ve realized that facing challenging circumstances and moving through them with the best I can muster at the time—whether that means speaking in public when I fear the spotlight,
delivering discomforting news to a friend, family member, or employee, or accepting my own weakness and insecurities as I face the truth about my limitations—does indeed push me to grow, usually more than the happier, easier circumstances in life do.

Fushi is growing, too. With each tragic event, failure, or disappointment, he becomes stronger, smarter, and kinder. And yet, I don’t think To Your Eternity is expressing a sentiment as simple as “pain is good.” That contradictory lesson doesn’t sit well with me, nor with the protagonist of the show. And besides, The Observer has enough creepy vibes—the lack of audible voice, the black robes (and on the whole an image that reminds me of Satan in The Passion of the Christ), the cold and matter-of-fact tone to his words—to lead to a conclusion that while he may not be a bad spirit, he doesn’t seem to be a good one either. 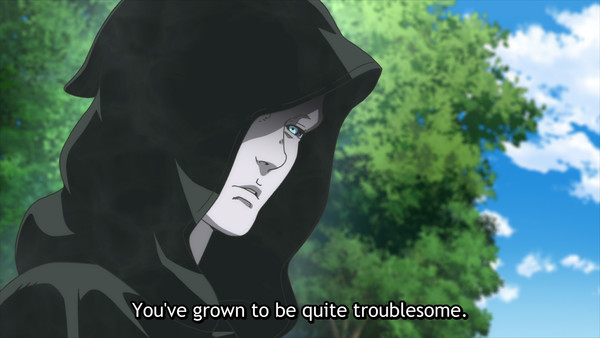 Thus while The Observer may be correct in stating that pain encourages growth, I still wonder: Isn’t there a more encouraging takeaway for both Fushi and the viewers, something that makes it worth enduring pain?

I think the answer begins to unravel through the characters themselves, both those on the more villainous side of the spectrum, like the demonic Hayase, and the kinder ones, like March. All are multi-faceted, and most are seen interacting with others in both foul and righteous ways, as with Gugu, who both burns his brother and gives his life to save him. 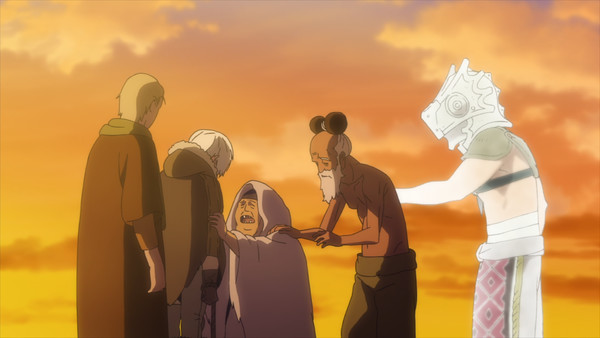 The majesty of humans is that they have the capability of doing so much good, but our personal experiences also teach us the opposite, that we’re capable of hypocrisy and corruption. The history of the world right into the present day is one largely of evil perpetrated by the powerful on the powerless, but even on a more personal scale, I see a darkness within me. I hurt those I’m closest to and do so with regularity. Like Gugu, I hurt my brother.

So to avoid suffering, both that which I receive and which I inflict, am I to run and hide, like I’ve spent much of my life doing?

Well, no—that sounds like the conclusion an anime character would reach before seeing the light, which in this case, is demonstrated by Fushi, who gives a different and I believe, better response. Despite the pain of broken bonds and other hurts pressed upon him, he continues to form relationships and community. He strives to help others, even though that means competing in the violent tournament. Fushi must know or at least sense that more pain will return to him at the end, but he places the impending torment aside to love and care for others, often at great cost to himself, and even when those others wound his body and soul.

Imagine that, an alien being with a child’s level of emotional development and who started life as a marble, is better at caring for others than I am. What a smack in the face, shamed by anime.

But if it’s an assault, it’s a benevolent one on my sense of character and integrity. Fushi challenges me to act like him, to remember that when I’m hurt by my own weaknesses and by the actions of those around me, I can respond with grace. In an unjust world, I, too, can love through the pain. My arena is my workplace, my neighborhood, even my culture, and my forged family is my actual one, and my friends, too. I can be like March, Pioran, and Gugu, and most profoundly, I can be like an extraterrestrial ball who demonstrates humanity at its best—even when it isn’t human at all.

Husband, dad, and old guy anime fan, Twwk is the founder of Beneath the Tangles, which approaches anime from a Christian perspective. You can find him sharing thoughts (but mostly posting LotR and Princess Bride memes) on Twitter.