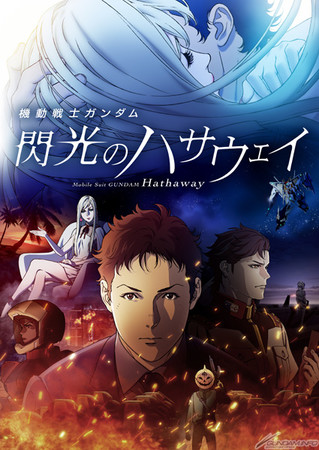 The staff of the Mobile Suit Gundam Hathaway (Kidō Senshi Gundam: Senkō no Hathaway) anime project teased during a talk event on Thursday that the trilogy’s second part has a working title of Kidō Senshi Gundam: Senkō no Hathaway: San of Bright (サン オブ ブライト). The film’s producer Naohiro Ogata elaborated that the Japanese katakana characters “San” (サン) can be read as “sun” or “son.” The film’s main character Hathaway Noa is the son of the character Bright Noa. The staff and Ken Narita, who plays Bright in the franchise, also teased at the event that Bright will appear in the second film.

Ogata added that the second part will have some differences from Yoshiyuki Tomino‘s original novel series.

The first Mobile Suit Gundam Hathaway part opened in Japan on June 11, after previously being delayed three times. The movie was originally slated to open in Japan in July 2020, but was delayed due to COVID-19. The film was delayed in April from May 7 to May 21, and was then delayed again due to the extended state of emergency declared in Japan.

The film has earned a cumulative total of over 2 billion yen (about US$18.18 million) in the Japanese box office.

The film is the first Gundam film since 1988’s Mobile Suit Gundam: Char’s Counterattack to top the 1 billion yen mark.

The film sold more than 90,000 Blu-ray Discs just in theaters as of July 5, less than a month since its opening. Theaters sold 52,989 copies of the limited edition, and 37,694 copies of the standard edition.

One Piece Manga Creator Eiichiro Oda: Story is in its Final Stage - News