This year’s combined 36th/37th issue of Akita Shoten‘s Weekly Shōnen Champion magazine announced on August 5 that Akatsuki and Kadokawa‘s Hachigatsu no Cinderella Nine smartphone game is inspiring a new manga titled Hachigatsu no Cinderella Nine S that will launch in the magazine’s next issue on August 19. Kōichirō Hoshino is drawing the manga, which will be an all-new story centering on a rookie high school baseball player named Asu Suzumura. 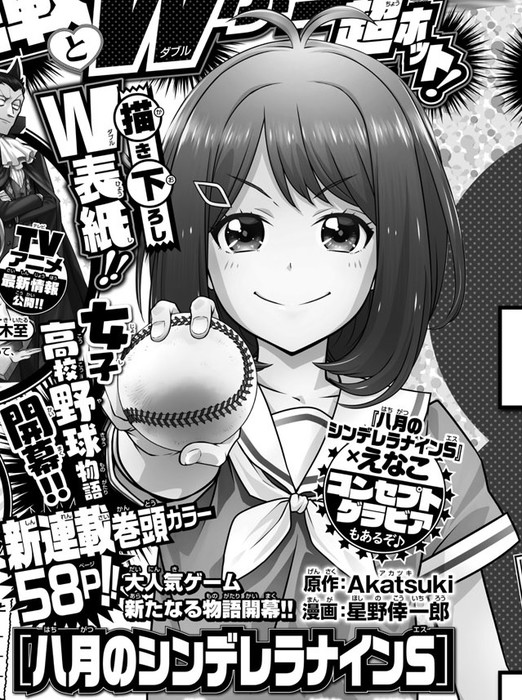 In the original Hachigatsu no Cinderella Nine game, the player takes the role of an unnamed former little senior league baseball ace who lost their baseball career after suffering an unspecified injury. The character moves to their grandmother’s hometown and enrolls in the local high school, resolved never to enter the world of baseball again. When the character meets Tsubasa Arihara, they are persuaded to be the manager of the school’s baseball team, and to take the team to the high school nationals at Koshien.

In the game, players gather team members (there are over 50 characters in the game) and experience the team members’ stories. Players also train the members to improve their skills, and take members to games to compete. Players then have to decide on the batting order.

The game launched on iOS and Android devices in June 2017. The game is free to play with in-game items available for purchase.

The game inspired a television anime that premiered in Japan in July 2019. Crunchyroll streamed the series as it aired. Sentai Filmworks licensed the anime, and released it on Blu-ray Disc on April 14.

The franchise also has a new original live-action series titled Hachigatsu wa Yoru no Batting Center de. (August is for Nights at the Batting Center) that premiered on July 7.