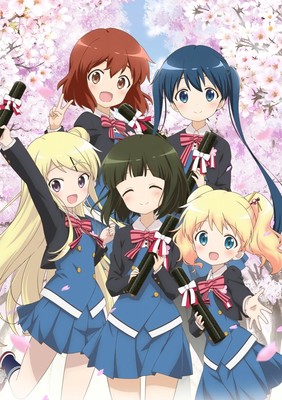 The film will open on August 20.

Hara launched the manga in Houbunsha‘s Manga Time Kirara Max in April 2010, and the series ended in March 2020. Houbunsha released the 11th compiled book volume in April 2020. A special Kin-iro Mosaic Best wishes manga launched in May 2020, and ended on March 18.

Yen Press is releasing the manga in English. The original manga’s story begins with Shinobu, a 15-year-old, seemingly “pure Japanese” girl who did a homestay in Great Britain. Even after coming back to Japan, she still misses her time overseas. One day, an air mail letter arrives from Alice, the girl in Shinobu’s host family in Great Britain. The letter reads, “Shinobu, I’m coming to Japan!” The “Japanese/British girls’ light comedy” follows the lives of Shinobu, Alice, and other girls from both Japan and Great Britain.

The first anime series based on the manga aired in 2013, and the second series, Hello!! KINMOZA, premiered in 2015. Crunchyroll streamed both seasons as they aired in Japan. Sentai Filmworks released the first series on home video in 2014, and released the sequel in October 2016. The Kin-iro Mosaic: Pretty Days anime special episode opened in theaters in Japan in November 2016.

Does It Hold Up?: Martian Successor Nadesico