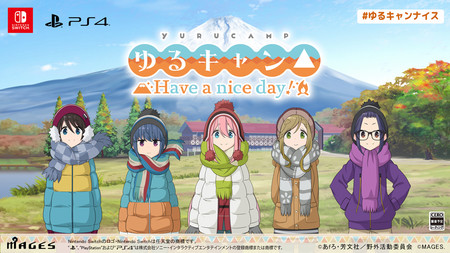 The game will launch on November 11, after being delayed from September 30 due to various circumstances.

The “gentle camping adventure” game will have normal, limited, and download editions. The limited edition will include a Choro-Q pullback car toy of Rin and her scooter and a game soundtrack.

Afro launched the manga in Houbunsha‘s Manga Time Kirara Forward magazine in 2015. Yen Press began releasing the manga in English in March 2018. The “slow outdoor manga” follows two young women. Rin likes to go camping by herself along the lakes that provide a scenic view of Mt. Fuji. Nadeshiko loves to take cycling trips by herself to places where she can see Mt. Fuji. After they meet, Rin and Nadeshiko take camping trips, eat cup ramen together, and enjoy the scenery.