4K remaster to be screened in U.S., Japan simultaneously on September 17 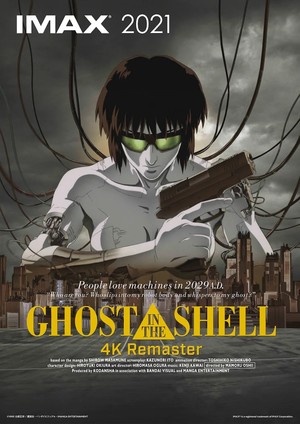 The 4K remastered version of the film screened in Hong Kong on March 11.

Funimation partnered with Lionsgate to screen Oshii’s Ghost in the Shell anime film in theaters in the United States in February 2017. Funimation describes the film:

In the year 2029, cybernetic government agent, Major Motoko Kusanagi and the Internal Bureau of Investigations are hot on the trail of “The Puppet Master”—a mysterious and threatening computer virus is capable of infiltrating human hosts. Working closely with her fellow agents from Section 9, the Major embarks on a high-tech race against time to capture the omnipresent entity.

Dreamworks and Paramount’s live-action film adaptation starring Scarlett Johansson opened in the United States in March 2017, and opened in Japan in April 2017.