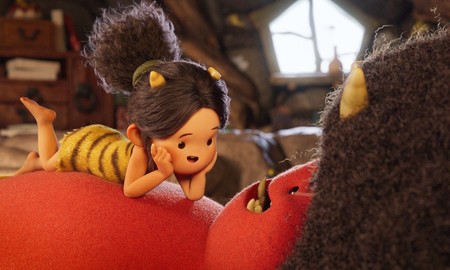 Okada told Animation Magazine she was “blown away” when Dice Tsutsumi pitched the project to her. She added, “I saw a lot of myself in his deeply personal connection to the story and felt many people around the world would feel the same. I felt I had to take this opportunity even if it meant facing unusual challenges for the first time, such as writing for an English-language production.”

Okada has written and overseen scripts for such anime as Toradora!, A Lull in the Sea, Mobile Suit Gundam: Iron-Blooded Orphans, Kiznaiver, and Dragon Pilot: Hisone and Masotan. She made her directorial debut with her Maquia – When the Promised Flower Blooms anime film, and more recently penned the scripts to the films Her Blue Sky and A Whisker Away. She is also writing and directing an original anime film called Alice to Therese no Maboroshi Kōjō (Alice and Therese’s Illusory Factory).

Netflix is collaborating with Tonko House on the Oni series, and it describes the story:

In a world filled with the oddball gods and monsters of Japanese mythology, one of the creatures’ free-spirited daughters, Onari, is determined to follow in the footsteps of the mighty heroes of lore, but her unique powers are yet to be revealed. Does she have what it takes to protect her peaceful village from the encroaching presence of the mysterious ‘Oni’ who threaten the gods?

Tonko House is producing the series with Japanese stop-motion company dwarf studios (Rilakkuma and Kaoru) and the Japanese visual effects studio Megalis. Marza and Anima are also working on the project.

Daisuke “Dice” Tsutsumi (Hayao Miyazaki‘s nephew-in-law) is the project’s creator and showrunnner. Robert Kondo is an executive producer alongside Kane Lee and Zen Miyake, with Megan Bartel as producer. Sara K. Sampson and Glen Keane Productions are also producers on the series.

Tsutsumi and Kondo founded Tonko House in 2014 and debuted the 18-minute Oscar-nominated short film “The Dam Keeper” in the same year.

A Man and His Cat Manga Gets Game - News