Virtual Cast, Inc. and Gugenka Inc. announced on Monday that they will host the “Miku Land 2021 Summer Vacation” virtual reality experience from August 27-31. The “virtual amusement park” dedicated to Hatsune Miku will be available worldwide for Virtual Cast and the HoloModels augmented reality application. The official YouTube channel for Hatsune Miku began streaming the event’s theme song video on Saturday. 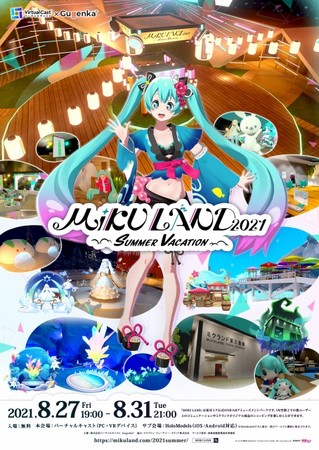 The virtual event will host guest performances by Tokino Sora, GEMS COMPANY, Shinonome Megu, and Mikudayo as well as performances by Vocaloid virtual singers such as Hatsune Miku, Kagamine Rin and Len, and Megurine Luka. The event will also feature a performance by spin-off character Mikudayo and Snow Miku’s pet Rabbit-Yukine.

During the VR experience, attendees “can explore the vast venue in their own custom avatar, take part in immersive VR attractions/activities, meet up with popular idols in VR face-to-face and purchase Vocaloid inspired VR items all from the comfort of their homes.”

Crypton Future Media developed Hatsune Miku from Yamaha‘s Vocaloid voice synthesizer software technology. The name refers to both the software voicebank and its anthropomorphic mascot, who is marketed as a virtual idol. Hatsune Miku has opened for Lady Gaga and was slated to perform at the Coachella Valley Music and Arts Festival last year, before its cancellation due to the new coronavirus disease (COVID-19).