My Hero Academia Gets New Stage Play in Spring 2022 – News

My Hero Academia: The “Ultra” Stage: Honmono no Hero PLUS ULTRA ver. play runs in Tokyo in December 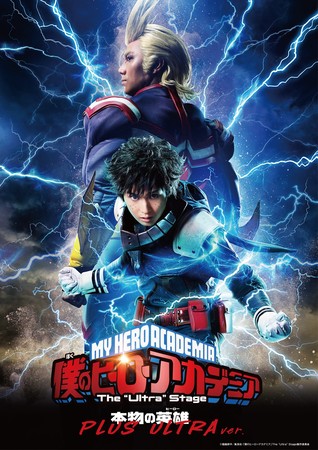 This year’s 38th issue of Shueisha‘s Weekly Shonen Jump magazine revealed on Monday that the stage play adaptations of Kōhei Horikoshi‘s My Hero Academia manga will get a new work in spring 2022.

The My Hero Academia: The “Ultra” Stage: Honmono no Hero PLUS ULTRA ver. stage play will run at Tokyo Dome City Hall from December 3-12, and at Tokyo Gekijō from December 24-26. Returning staff members include Tsuneyasu Motoyoshi as director, Hideyuki Nishimori as scriptwriter, Shunsuke Wada as composer, and Takuya Shiono (Umebō) as choreographer.

My Hero Academia: The “Ultra” Stage, the first stage play of the manga, ran in Tokyo and Osaka in April 2019. Live Viewing Japan streamed the play online from August 13-19.