‘My Youth Romantic Comedy Is Wrong, As I Expected’ Light Novels Get New ‘Yui’ Novel – News 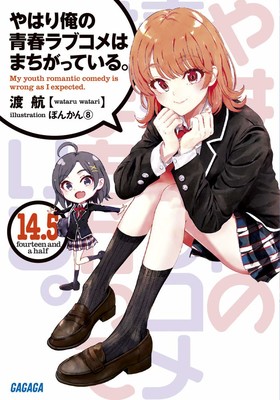 After a lively and warm party, the winds of winter drift through Christmas, and the thought that Yui keeps hidden in her heart flickers from its touch. She knows there will be prayers left unanswered, and wishes that will remain wishes forever, but she knows for sure that there is something she wants. She doesn’t care if it’s a lie, if it’s wrong, if it’s not how things are supposed to go. So long as she can hold that hand.

It is, after all, a night of wishes, with as many stories to be counted as there are wishes whispered in the wind. And this is one such story, the story of Yui Yuigahama.

Watari began the original light novels with illustrations by Ponkan8 in Japan in 2011. The series’ final arc began with the 12th volume, which shipped in September 2017. The 14th and final volume shipped in Japan in November 2019. The novels also received a series of short story collections titled Yahari Ore no Seishun Love Come wa Machigatteiru. Shin, a new volume of which shipped with each of the six Blu-ray Disc volumes of the anime’s third season from September 2020 to March 26. The short stories are set on the day immediately after the ending in the 14th volume. Watari also wrote a more recent “volume 14.5” (seen right) for the series, which shipped on April 20, and tells the story of Komachi and Iroha, the new generation of the Service Club.

My Teen Romantic Comedy SNAFU Climax (Yahari Ore no Seishun Love Come wa Machigatteiru. Kan), the third television anime season based on the novels, premiered in July 2020 and aired for 12 episodes. Sentai Filmworks licensed the series for release outside Asia, and streamed it on HIDIVE and Crunchyroll. HIDIVE began streaming an English dub for the series in August 2020.

Yen Press licensed the novel series and Naomichi Io‘s My Youth Romantic Comedy Is Wrong, As I Expected @ comic manga adaptation for English publication in 2015.