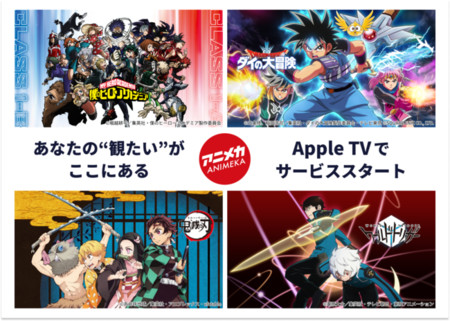 Shueisha, my theater D.D., TV Tokyo, and Toei Animation announced on August 26 that they launched a new anime streaming service titled “Animeka” in Japan on the same day. The companies confirmed to ANN on Monday that while the streaming service is currently only available in Japan, “an international roll-out is expected.” The four companies created the Anime LLP company in April to oversee operations of the service.

The service in Japan is available within the Apple TV app, which is available on Apple devices as well as on most Sony and LG smart TVs, Amazon Fire TV, Chromecast, PlayStation, and Xbox.

The companies stated the content includes hundreds of anime from a wide range of genres, and also includes past titles and recent hits. The service also plans to release exclusive content, including spinoffs and documentaries based on popular anime.

The service in Japan has a 14-day free trial period, and afterward costs 450 yen (about US$4.10) per month. The service includes online and offline video-on-demand.