Project is inspired by the “Loot” social network 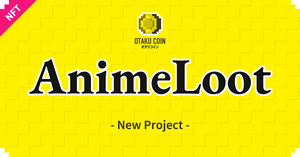 The Otaku Coin cryptocurrency venture announced an “AnimeLoot” project on Monday to create an isekai anime with NFTs (Non-Fungible Tokens).

The project is inspired by the “Loot” social network, where participants obtain a unique list of randomly generated item names (referred to as “loot”) through purchasing NFTs on the Ethereum blockchain. Although the item names possess no inherent attributes, nor do the items interact with any broader game rules, the concept went viral last week as participants began creating their own artwork and story concepts around the lists.

The “AnimeLoot” project is “an experimental bottom-up anime project” that encourages similar community participation. Those who sign up can receive a free token called the “Default Settings Replica NFT,” which will generate their character’s basic characteristics under the following four categories:

The direction of the anime “will gradually take place as the project moves on.”

The Otaku Coin cryptocurrency launched in 2018. It is an ERC20 token, which runs on the Ethereum platform. According to the concept paper, the goals of Otaku Coin are to allow fans to vote on or fund projects, eliminate foreign currency conversion fees, and implement a reward program for “otaku activities” such as watching anime or purchasing official products.

Disclosure: Anime News Network CEO Christopher Macdonald was part of the Otaku Coin project’s initial advisory board. He left the board in spring 2018.