The official website for P.A. Works‘ original anime series Aquatope of White Sand (Shiroi Suna no Aquatope) announced on Friday that the anime has cast Yui Ishikawa as Chiyu Haebara (pictured below), the caretaker of Aquarium Tingara who appears in the anime’s eighth episode. The website also announced that ARCANA PROJECT will perform the second opening theme song “Tomedonai Shiosai ni Bokutachi wa Nani wo Utau Darо̄ ka” and Risa Aizawa of Dempagumi.inc. will perform the ending theme song “Shingetsu no Da Capo.” 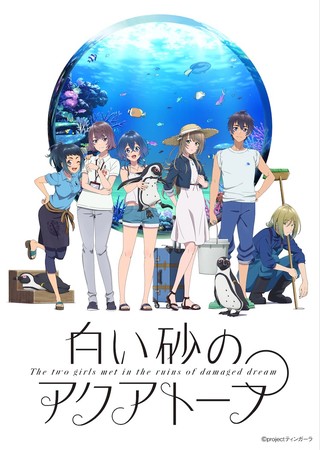 The anime premiered in Japan on July 8. Crunchyroll is streaming the series as it airs in Japan.

The anime takes place at Gama Gama Aquarium, a small aquarium in Okinawa, an hour’s bus ride from Naha. Kukuru Misakino is an 18-year-old high school student who works there, and she knows about the “secret” of the aquarium: sometimes you can see mysterious things. One day Kukuru meets Fuuka, standing in front of a water tank with flowing hair and a tear rolling down her cheek. Fuuka has given up on her dream of becoming an idol and she has run away from Tokyo to Okinawa. Wanting to find a place to belong, Fuuka earnestly asks to work at the aquarium. The anime follows Kukuru and Fuuka as they deal with the issues of the secret of the aquarium and a looming crisis of its possible closure.

Episode 8 - How a Realist Hero Rebuilt the Kingdom