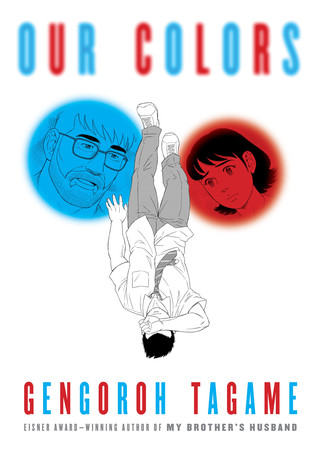 Publisher Pantheon Books confirmed with ANN on Tuesday that it will release Gengoroh Tagame‘s Our Colors (Bokura no Shikisai) manga in English on May 24, 2022 in one omnibus hardcover volume.

Translator Anne Ishii had revealed on the Manga Mavericks podcast in November 2020 that Pantheon Books would release the series. Ishii translating the manga.

Tagame launched the manga in Futabasha‘s Monthly Action magazine in March 2018, and ended it in May 2020. Futabasha published the manga’s third and final compiled book volume in September 2020.

Set in contemporary suburban Japan, Our Colors is the story of Sora Itoda: a sixteen-year-old aspiring painter who experiences his world in synesthetic hues of blues and reds, and is governed by the emotional turbulence of being a teenager. He wants to live honestly as a young gay man in high school, but that is still not acceptable in Japanese society. His best friend and childhood confidante is Nao, a young woman whom everyone thinks is (or should be) his girlfriend, and it would be the easiest thing to play along—she knows he is gay but knows, too, how difficult it is to live one’s truth in his situation.

Sora’s world changes forever when he meets Mr. Amamiya, a middle-aged gentleman who is the owner and proprietor of a local coffee shop, and who is completely, unapologetically out as a gay man. A mentorship and platonic friendship ensues, as Sora comes out to him and agrees to paint a mural in the shop, and Mr. Amamiya counsels him about how to deal with who he is. But it won’t be easy. Mr. Amamiya paid a high price for his freedom of identity, and when a figure from his past suddenly appears, the situation becomes a vivid example of just how complicated life can be.

Tagame launched the My Brother’s Husband manga in Futabasha‘s Monthly Action magazine in November 2014 and ended it in May 2017. Futabasha published the manga’s fourth compiled volume in July 2017. Pantheon Books shipped the manga in two two-in-one omnibus volumes in English. The manga was nominated for Best Comic at the 44th annual Angoulême International Comics Festival in 2017. The manga also won an Excellence Award at the 19th Japan Media Arts Festival Awards in 2015. Amazon named the book as one of 20 books in the “Comics & Graphic Novels” category of its Best Books of 2017 list. The Harvey Awards nominated the manga for its “Best Manga” category in 2018.

The manga inspired a live-action mini-series adaptation that had three episodes that premiered in March 2018.