Home » Patrick Imbert, Director of The Summit of the Gods
Anime

Patrick Imbert, Director of The Summit of the Gods 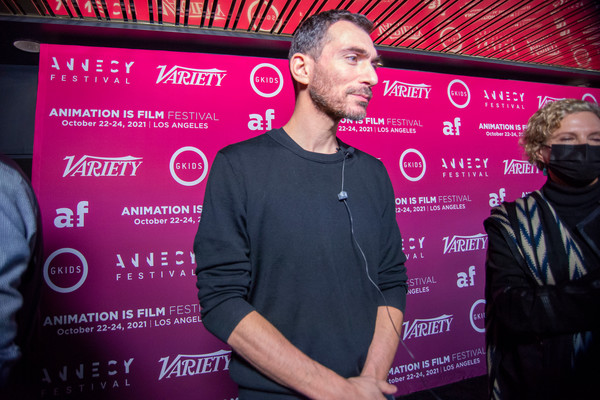 French animator and director, Patrick Imbert, made his directorial debut in the 2017 animated French film, The Big Bad Fox and Other Tales. After four years, he now returns to the Animation is Film Festival with The Summit of the Gods. Based on the manga drawn by Jiro Taniguchi, the animated drama film kicked off the start of AiFF as well as its U.S. premiere.

The Summit of the Gods follows photojournalist Fukamachi, who searches for the unyielding climber, Habu, after an encounter in Nepal. Originally turning down a shady figure who claims to possess the camera of the famed mountaineer, George Mallory, Fukamichi runs after him only to find Habu one step ahead. The film will be Imbert’s first as a solo director.

Right before the highly anticipated screening of The Summit of the Gods, director Imbert spoke with ANN on the red-carpet about his latest work. After the screening, Imbert participated in a Q&A with a moderator from AiFF.

How did you transition from your previous movie, The Big Bad Fox, to working on The Summit of the Gods?

It’s funny because it was by chance. While I was working on The Big Bad Fox, the producer came to me and asked me to do some first sketches of character design. Little by little, I started being more involved in this project and finally they said, “Why don’t you do this?”

Was this after Netflix‘s involvement as a distributor?

No, Netflix actually came in very late in the process. They purchased the movie just before it was finished. We had worked on our own.

How did this project come about?

The idea for this adaptation originally came from the first producer, Jean-Charles Ostoréro. He likes to ski on mountains and is a fan of Jiro Taniguchi‘s work. So, he decided to bring his two passions together and that makes a movie.

I read that the movie was planned to be CG animated, but from the trailer that isn’t the case. Why was there a change?

We didn’t do anything special. 2D is flat and doesn’t have depth. But it’s our job to draw well and paint well in order to make the impression of 3D depth. We didn’t reinvent the wheel of animation. We have separate tools, ask questions, and figure out what to do. However, I have no specific rules or ways of doing things. We try to do things and if it’s not good enough, then we try again.

Since this movie is based on a manga, which is based on a novel, how did you incorporate elements from both into your vision of the film? With a movie, there’s only so much you can fit within 90 minutes or so. What did you decide was most important to keep in your vision?

From my point of view as a director, you must know what you really want to say. I discovered what I wanted to include while writing the script, and everything was clear as I was building the story. I was able to make the choices along the production. My goal was to talk about ‘why we do the things we do.’

Following the film screening, director Imbert sat down to speak on his style of animation and storytelling.

Did you have any particular method or secret to drawing a good scene?

If I had some, I could become rich by selling a method that teaches someone how to create good scenes. Unfortunately, I don’t. All the scenes in cinema, such as the ones for storyboards in animation, you have to try things and see if they work or not. Let me say that we re-did things many, many, many, many times, because it never works the way you want. So you have to retry all the time.

With your consultants, did you also talk about the equipment that the mountaineers have to carry? Such as where do you have this on your belt or this on your pants or this in your backpack? What does it look like?

Yes, it was our job to get the documentation from the internet. It’s really convenient. Thank you, internet. There are so many photos from games, movies, etc. that once you gather all of them, you don’t know what to do with it. So we needed consultants for that side of the job.

In the movie, there are many periods and the key equipment is not the same in the 60s and in the 90s. It was very important to be precise and to be specific. Our consultant also came to the studio with all his equipment as well as the ropes. And he would hang himself at the balcony to demonstrate a scene.

He’d say, “Okay, now this is the accident. If I want to go up, I have to do this knot and here is the knot.” We took many pictures of his demonstration, which were very useful. We could not have such scenes without him, but I think I will never do it again because of that.

I’ll bet your neighbors were surprised to see someone climbing the balcony.

Luckily, the balcony was inside. 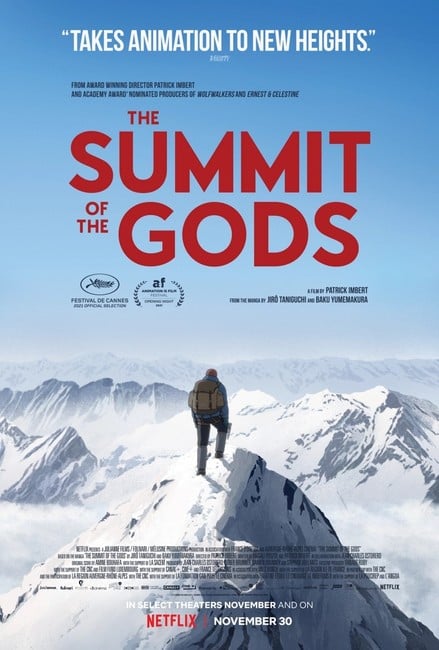 Can you talk a little bit about the backgrounds in this film because I think they’re very striking and very beautiful. You feel like you’re in the mountains and did you have a large group doing these paintings and how did you work with them?

Yes, it was a large group because even for animation we need a lot of people to do each drawing and each background. Regarding the background, it is a painting. We try to have an approach that is the most cinematographic as possible. We tried to focus less on the fact that we’re an animation film and focused more on live-action movies and photography.

We tried by painting to get closer to this impression of reality. It’s always an impression. It was important to put a lot of details in this in order to feel the scale, especially for the mountain, which is very huge. You must not lose yourself in the detail. I wanted not be just descriptive, but also give impressions with these paintings.

Another impression that they give you is “cold.” I don’t think anyone’s set fire to the seats in front of them to keep warm but you get…

…a good job from the AC.

Those backgrounds do give you a sense of the iciness and how unforgiving that cold is at those heights.

Thank you. That means it works. But this feeling comes with many tools. I can say the picture is a tool, as is the background, the image, and the drawings. But, also the sound design and the music, because they’re all tools to draw out emotion. Especially during the mountain scenes, there is no dialogue anymore because the characters are focusing on their efforts so they cannot talk.

This is the time where the mountain can talk. We pay a lot of attention to this. They all come together: the sound design of the wind, the snow, the steps in the snow, the glaciers cracking. It’s all part of the feelings you have at the end.

I didn’t want to do something for kids. At the beginning, the producers were talking about the movies to the financial partners, saying it was a “family movie.” And I was behind mouthing, “no.” It’s definitely not for kids, and more for teenagers and adults. However, for me it was really important that the theme could be appreciated easily by anyone. I want people to like it, but I don’t want people to like it just because.

I think your timing is good because there have been several documentaries in the last couple of years about people climbing without ropes and climbing surfaces that haven’t been claimed before. I suspect that your film will appeal to the audience and outdoor people who like to go and try and climb rocks.

Haha, don’t do this. [Imbert points at the screen].

Episode 4 - The Fruit of Evolution: Before I Knew It, My Life Had It Made