The official Twitter account for Sakugan (Sacks&Guns!!), Satelight‘s anime of Nekotarō Inui’s Sakugan Labyrinth Marker (Drilling Labyrinth Marker) novel, began streaming a new promotional video for the anime on Friday. The video reveals the anime’s insert song “Because of you” by MindaRyn. 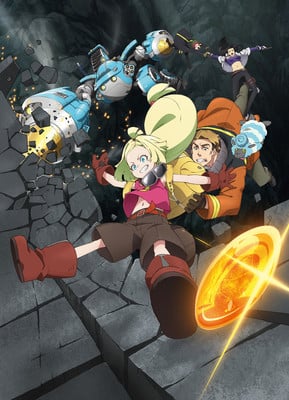 The anime will premiere on Tokyo MX and MBS on October 7 at 11:30 p.m. (10:30 a.m. EDT), and will then run on BS11 on October 9. The three main cast members and the director will appear at an advance online screening of the first two episodes on September 19 on the Niconico Live service.

The anime was delayed to 2021 from its originally slated 2020 broadcast. Crunchyroll will stream the anime as it airs in Japan, and it premiered the first episode in advance on August 5.

The distant future, long after the Western calendar is no longer used.

Humans live shoulder-to-shoulder, cramped in the “Labyrinth,” an underground world deep below the surface.

There are many colonies where people live in the underground Labyrinth. The place is known for extreme high temperatures, but also for lodes of gold, silver, and other riches.

In one of the colonies named Pin-in, a curious nine-year-old girl named Memempu and her father Gagumber board a two-person work robot and mine for ore. They eke a living as the lowest of lowest “Worker” occupations.

One day, Memempu begs her father Gagumber to set out as Markers — those who chart the innards of the Labyrinth as a spelunker — to search for her mother who left their home.

If they encounter a “mysterious giant creature” lurking in the caves, the survival rate is less than 5%. Since discovering an unknown world is dangerous work, “maps” hold great value in the world of Labyrinth and fetch high prices on the market.

A Marker is the most dangerous, but also the most lucrative, job.

Gagumber decides he cannot hold back the ever-curious Memempu from going off on her own countless times, and finally gives in. The two embark on a journey together in the work robot.

However, the “cost” of curiosity …

The “truth” they finally uncovered …

This is a father and daughter’s epic journey with the theme of family love.

Jun’ichi Wada (WorldEnd, Caligula) is directing and supervising the series scripting at Satelight. Yuji Iwahara (King of Thorn, Darker than Black, Dimension W) drafted the the original character designs, and Shunpei Mochizuki adapted them for animation.

The visual below depicts the underground colony of Pin-in, where the father Gagumber and his daughter Memempu — the story’s protagonists — live.

The anime will get a manga adaptation that will debut on Square Enix‘s Manga Up! manga website this summer.