While I’ve called Dynasty Warrior‘s gameplay recipe outdated before, the franchise has gone out of its way to prove me wrong recently, with games like Age of Calamity and Persona 5 Strikers exceeding my expectations. These games have their own unique mechanics that add some much-needed depth to Warrior‘s combat while delivering thoughtful, compelling stories at the same time. However, Samurai Warriors 5 appears to be a return to form for the series in all the worst ways. While it delivers on the charm and striking visual style that must’ve made the series a hit in the first place, the experience of actually playing through this game quickly becomes more of an exercise in tedium than anything else.

The most creatively bankrupt aspect of Samurai Warriors 5 is by and large its combat. The typical copy-and-paste gameplay we’ve seen in all of these titles – where each character has access to around six or seven combos of varying damages and areas of effect – is further weakened here by the nullification of these characters’ unique qualities. In Samurai Warriors 5, movesets are attached to weaponry, and each character only has a single combo unique to themselves, unlocked by equipping them with their designated weapon. This is the worst decision a game like this could make; from what I’ve come to understand after immersing myself in the franchise‘s fanbase for the past few weeks, most players’ enjoyment sprouts from playing as their favorite characters and the unique movesets attached to them. I know in Age of Calamity and Persona 5 Strikers, each playable character felt wholly unique from every other, and I quickly gravitated to the ones who felt the best to me. That process of attachment is completely decimated here, and as my playthrough went on, I became less and less enthused with this game every time I picked up another character only to realize they had the exact same moveset as one I already had. Even the main character himself was not immune to being a copy of someone else. 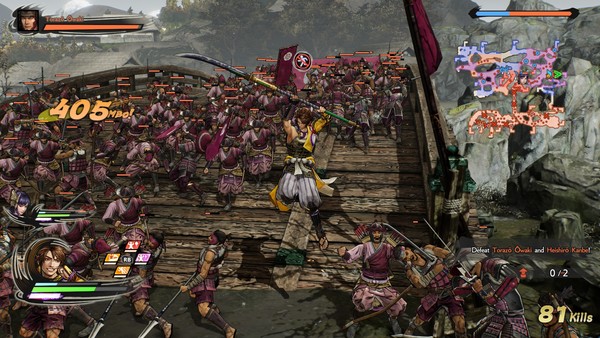 Speaking of characters, this game was utterly unable to get me excited about a single one of them. Characters would ally themselves with me on the battlefield before betraying me and then return to fight on my side again and I wouldn’t even bat an eye, because Koei-Tecmo couldn’t write them well enough to make me care. Perhaps I shouldn’t blame the writing completely, though, as a big part of the problem here is that there’s no English localization (or localization in any language other than Japanese, for that matter), and reading sprawling boxes of text at the bottom of the screen while mashing through hordes of enemies on what might just make for the busiest screen I’ve even seen in a game is nigh impossible. I missed the vast majority of goings-on in these segments, and it wouldn’t surprise me if I learned that I missed some important plot elements or character developments due to this oversight.

The handful of props I can give to this game are all due to its visual style, and to a lesser extent, its audio design. The cell-shaded art with broad, stylized linework is reminiscent of what I would imagine an HD Okami to look like – I never tire of watching this game play itself out. The same props go for most of the special attacks here. Their dramatic flair and bombastic swagger tricked me into enjoying my first few hours of gameplay before they overstayed their welcome. Character designs are similarly distinctive and compelling; I just sorely wish that each character was as unique from a gameplay perspective as they were from a visual one. As for the sound, this game is unassuming but manages to not be a bother, which is an achievement unto itself with music as repetitive as this one has. 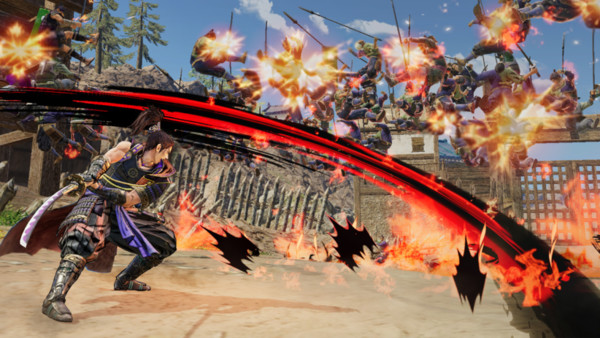 I’ll say what I’ve said before about the Dynasty Warriors franchise and its spinoffs: it desperately needs some innovation. When the franchise does things differently and puts a fresh spin on its established formula, it puts out titles that are generally well-received. But it’s like they’ve given up with their mainline entries, thinking that they can best profit off of these games by hardly putting any effort in and selling variety and reused maps as paid DLC. Maybe if they put as much effort into their Dynasty and Samurai titles as they did into their external IP games, they’d be passable for me, but in my eyes, Koei-Tecmo has its work cut out for it with these titles.