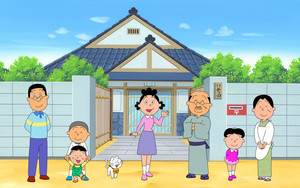 The Sazae-san anime is inspiring a new stage play that will run at the Meijiza Theater in Tokyo from January 29 to February 13, 2022.

Shingo Katsurayama replaced Ryūji Harada as Masuo after Weekly Bunshun reported that Harada had been having affairs with multiple women.

The previous stage play adaptation opened in September 2019 in Tokyo and Fukuoka. The stage play was part of the 50th anniversary celebration for the anime adaptation of Machiko Hasegawa‘s Sazae-san manga. Tamura also directed and wrote the play, and set it a decade after the anime’s story.

The anime adaptation of Machiko Hasegawa‘s family life manga Sazae-san began airing in October 1969. The anime is usually the highest ranked animated series in Japan each week. In 2013, the show was awarded the Guinness World Record for longest-running animated television series, an award it extended in 2019.