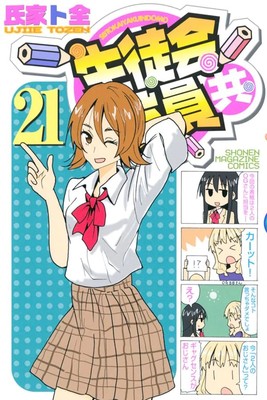 The 21st compiled book volume of Tozen Ujiie‘s Seitokai Yakuindomo manga revealed on Tuesday that the manga will end with its 22nd volume, which will ship in January 2022.

Seitokai Yakuindomo centers around Ōsai Academy, a former all-girls private high school that was integrated to include boys. The student body is split between 524 girls and 28 boys. Takatoshi Tsuda is pushed into becoming the vice president of the student council, where he is the lone male member surrounded by girls.

Ujiie launched the manga in Kodansha‘s Magazine Special in 2007, before switching it to Kodansha‘s Weekly Shōnen Magazine in July 2008.