Seraph of the End: Guren Ichinose – Catastrophe at 16 Manga Ends in 12th Volume in February 2022 – News 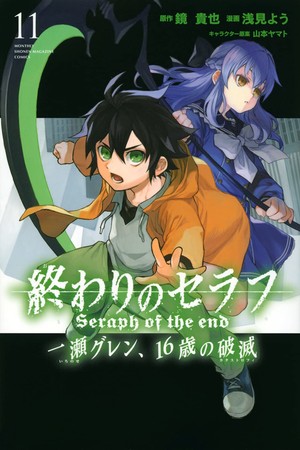 The 11th compiled book volume of Yo Asami‘s Seraph of the End: Guren Ichinose – Catastrophe at 16 manga revealed on Wednesday that the manga will end with the 12th volume, which will ship on February 4, 2022.

Vertical published Takaya Kagami‘s original Seraph of the End: Guren Ichinose – Catastrophe at Sixteen novel series in English, and it describes the story:

The apocalypse is not only near, but a certainty. Set before the event and the aftermath detailed by the hit manga, this stand-alone prequel light novel series chronicles the inexorable approach of the reign of vampires. Witness the trials of Guren Ichi­nose, who must hide his true strength even as he is trampled on at an academy for the insufferably privileged.

The spinoff novel series on which the manga is based ended with seven volumes in 2016, with illustrations by Yamato Yamamoto. Kagami launched a sequel novel series titled Seraph of the End: Guren Ichinose: Resurrection at Nineteen (Owari no Seraph: Ichinose Guren, 19-sai no Resurrection) in 2017, this time with illustrations by Asami. Kodansha published the second volume in that series in 2018, and Kodansha Comics is also publishing that series in English.

Kagami, Yamamoto, and storyboard artist Daisuke Furuya launched the original Seraph of the End: Vampire Reign manga in Shueisha‘s Jump SQ. magazine in 2012, and Shueisha published the manga’s 24th compiled volume on June 4. Viz Media publishes the manga in North America digitally and in print, and the company published the 21st compiled volume on June 1.

The manga inspired a 12-episode television anime series in April 2015. The 12-episode second season of the anime, Seraph of the End: Battle in Nagoya, premiered in October 2015, and Funimation streamed both seasons as they aired in Japan, and released them on home video.

Source: Seraph of the End: Guren Ichinose – Catastrophe at 16 volume 11