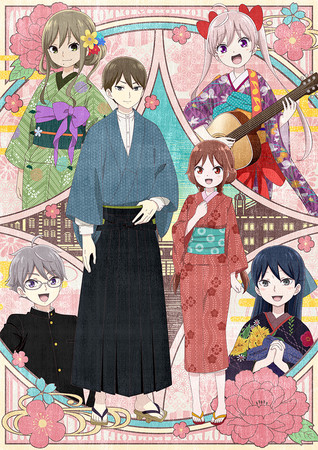 The novel will feature four short stories, as well as a “what if” fantasy world spinoff short story with an accompanying eight-page manga drawn by Kirioka.

The manga takes place in Japan’s Taisho era, and centers on Tamahiko Shima, a young man who lost the use of his right hand in an accident, and now lives in a rural area of Chiba prefecture to take care of his health. One day he meets the naive and devoted Yuzuki, whom Tamahiko’s father bought to be Tamahiko’s wife. Through this meeting, the pessimistic and and withdrawn Tamahiko begins to change.

The manga is inspiring a television anime adaptation that will premiere in October. Funimation will stream the anime.

Kirioka is drawing a new spinoff manga for the series titled Taisho Otome Otogi Banashi: Enseika no Shokutaku (A Pessimist’s Dining Table). The manga debuted on the Shonen Jump+ website and app on July 23.