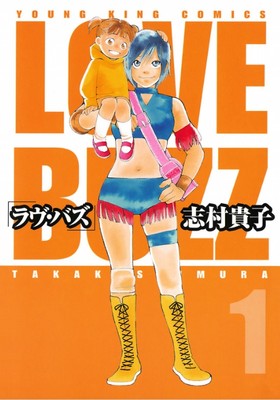 The September issue of Kadokawa‘s Monthly Comic Beam magazine revealed on August 12 that Takako Shimura will draw a new side story chapter for her Love Buzz manga in the magazine’s next issue on September 10. The new chapter will take place after the manga’s story.

The manga centers on young pro wrestler Kaoru Fuji, who at the height of her promising career, disappeared off the wrestling scene. She returns to her gym five years later, with her daughter Erika in tow. With nowhere else to live, she asks to live in the gym with her daughter, while at the same time planning to resume her career. However, not everyone around her is as willing as her to overlook the last five years.

Shimura launched the manga in Shonengahosha‘s Young King Bessatsu Kingdom magazine from 2002 to 2004, when the magazine ceased publication. The manga then transferred to Young King Ours, where it ran until 2005. Shonengahosha published three compiled book volumes for the manga.

Shimura is best known for her Wandering Son and Sweet Blue Flowers manga, both of which have inspired television anime series adaptations in 2011 and 2009 respectively. She also drew the original character designs for the Aldnoah.Zero anime and Battery the Animation. She drew a short-run manga for the latter. Fantagraphics Books is releasing her Wandering Son manga in North America, and Viz Media is releasing Sweet Blue Flowers. Seven Seas is releasing Shimura’s Even Though We’re Adults (Otona ni Nattemo) manga digitally and in print.