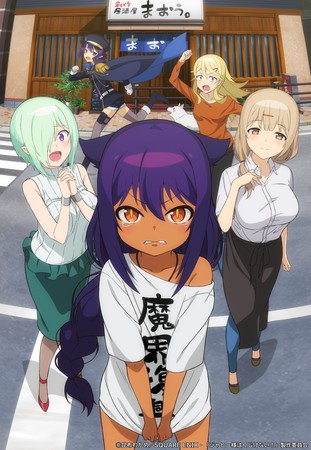 The official website for the television anime of Wakame Konbu‘s The Great Jahy Will Not Be Defeated! manga announced on Wednesday that Miho Okasaki will play Maō (the demon lord) in the show. Okasaki will also perform the ending theme song “Petals” for the show’s second cours (quarter of a year).

The anime premiered on July 31, and will run for two cours or half a year.

Square Enix Manga & Books is releasing the manga in English, and it describes the story:

The Great Jahy, the Dark Realm’s second-in-command, cuts a frightening figure, feared and revered by all. But when a run-in with a magical girl results in the destruction of the precious mana crystal, the Dark Realm falls, transporting the newly tiny and powerless Jahy to the human world! Unfortunately, plotting the revival of the Dark Realm from a cramped, crumbling one-room apartment is no easy feat when you have rent to pay and a job to keep!

Mirai Minato (Masamune-kun’s Revenge, Our Last Crusade or the Rise of a New World, BOFURI: I Don’t Want to Get Hurt, so I’ll Max Out My Defense.) is directing the anime at SILVER LINK. Michiko Yokote (Shirobako, The Magnificent KOTOBUKI, Children of the Whales) is in charge of the series scripts. Saori Nakashiki (Haikara-San: Here Comes Miss Modern Part 1 animation director) is the character designer and chief animation director. Kōji Fujimoto (sus4 Inc.) and Osamu Sasaki are composing the music.

The manga has been running in Square Enix‘s Gangan Joker magazine, and Square Enix published the seventh volume on July 20.

Sources: The Great Jahy Will Not Be Defeated! anime’s website, Comic Natalie