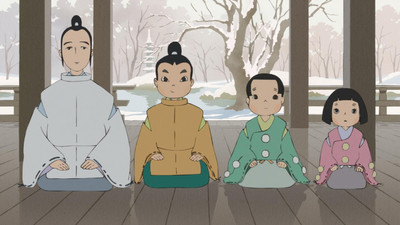 Furukawa’s novel renders the classic Japanese epic The Tale of the Heike in modern language, and the anime will be the first television anime adaptation of the novel. The original epic tells the story of the rise and fall of the Taira clan during the Genpei War. The anime centers on the perspective of Biwa, a blind traveling minstrel. Biwa meets Taira no Shigemori, heir to his clan, and bearing a supernatural sight that can perceive ghosts. She then proclaims to him a prophecy of his clan’s downfall.

Naoko Yamada, a veteran director on several Kyoto Animation works, is directing the anime as her first directorial work after leaving Kyoto Animation, with frequent collaborators Reiko Yoshida as scriptwriter and kensuke ushio as music composer. Fumiko Takano is drafting the original character concepts, while Takashi Kojima (Flip Flappers, Ride Your Wave) is adapting those character designs for animation. Tomotaka Kubo (Deho Gallery) is in charge of art direction, and Ken Hashimoto is the color key artist. Shotaro Imai is the in-between animation director. Kazuto Izumita is the compositing director of photography, while Kiyoshi Hirose is editing. Eriko Kimura is the audio director with Hiromune Kurahashi (Otonarium) in charge of sound effects. Yoshihiko Sata is credited for historical supervision, and biwa player Yukihiro Gotō is credited for overseeing the portrayal of the biwa playing.

Masaaki Yuasa, the co-founder of Science SARU, is also working on a musical anime feature film titled INU-OH based on the Heike Monogatari: INU-OH no Maki (Tales of the Heike: INU-OH) novel also by Hideo Furukawa, but Science SARU has not indicated if or how Yuasa’s film is related to the television anime. Science SARU CEO Eunyong Choi had stated last year that the studio is also working on “another TV show with another director” besides Yuasa.