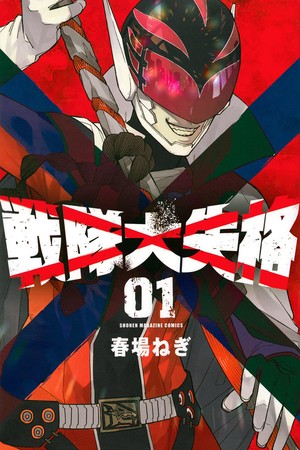 This year’s 41st issue of Kodansha‘s Weekly Shōnen Magazine revealed on September 1 that Negi Haruba‘s Sentai Daishikkaku (Sentai Big Disqualification) manga is going on hiatus due to the author’s poor health. The magazine did not state when the manga would return.

The manga’s story takes place in a world where, 13 years ago, a giant floating fortress appeared 10 kilometers in the sky, and an evil army called “Kaijin” started attacking humanity. The Kaijin have regenerative powers, so they are effectively immortal and pose a real threat to humanity. A new organization called Ryūjin Sentai Dragon Keeper featuring people with mysterious powers and weapons called Jingu continue to fight against the Kaijin to this very day.

Haruba launched The Quintessential Quintuplets manga in Weekly Shōnen Magazine in August 2017, and ended the series in February 2020. Kodansha Comics is releasing the manga digitally and in print.

The manga inspired an anime that premiered in January 2019 and aired for 12 episodes. Crunchyroll streamed the series as it aired in Japan, and Funimation offered an English dub. The Quintessential Quintuplets ∬, the series’ second anime season, premiered on January 7 and also aired for 12 episodes. Crunchyroll streamed the second season, and Funimation streamed an English dub.