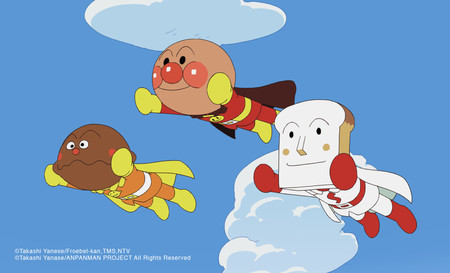 Streaming service Tubi announced on Friday that it has begun streaming seven more films from the Anpanman franchise.

Tubi had announced in April that it would stream ten films from the Anpanman franchise with English and Spanish dubs in the U.S., Canada, Australia, New Zealand, and Mexico. Tubi has begun streaming the first of the ten films, Apple Boy and Everyone’s Hope, in April. The service added Purun, The Soap Bubble in July. Tubi also plans to stream Twinkle! Princess Vanilla Of Ice Cream Land.

Eiga Soreike! Anpanman Fuwafuwa Fuwari to Kumo no Kuni (Soreike! Anpanman the Movie: Fluffy Fuwari and the Cloud Country), which would have been the 2020 Anpanman anime film, opened in Japan on June 25. The film was originally slated to open in Japan in June 2020, but was indefinitely delayed for the safety of theatergoers during the new coronavirus disease (COVID-19) pandemic.

Soreike! Anpanman Kirameke! Ice no Kuni no Vanilla-hime (Let’s go! Anpanman: Sparkle! Princess Vanilla of the Land of Ice Cream), the 31st anime film in the franchise, opened on June 28, 2019. The film celebrated what would have been the 100th birthday of Anpanman creator Takashi Yanase. The anime sold 104,826 tickets and earned 125,512,500 yen (about US$1.15 million) to rank #4 in its first weekend.

The Soreike! Anpanman television anime series began in 1988, and new Anpanman films have opened each summer since 1989. The 2014 film Soreike! Anpanman: Ringo Bōya to Minna no Negai (Let’s Go! Anpanman: The Apple Boy and Everyone’s Wishes) was the first film since Anpanman creator Takashi Yanase‘s passing.