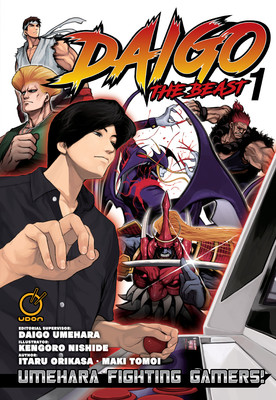 The DAIGO THE BEAST manga explores the real-life events that built the fighting game community, and the strategies and play styles developed by Daigo and his fellow gamers. In Volume 1, Shinya Ohnuki, a gamer with prodigious talent, is drawn into the wild and wonderful world of fighting games after a chance meeting with Daigo. As they face off in iconic games like Street Fighter II, Street Fighter Alpha, and Darkstalkers, an enduring rivalry between Daigo and “Nuki” is born!

Orikasa, Tomoi, and Nishide launched the manga in Kadokawa‘s Weekly Georgia magazine in 2014, and ended in 2018. Orikasa and Tomoi wrote the manga, while Nishide drew the art. Kadokawa published the manga’s eighth and final volume in August 2018.

Orikasa and Nishide previously collaborated on Umehara – To Live is to Game, a one-volume manga similarly based on Umehara. PHP published the manga in September 2013.